Kolkata Knight Riders made a convincing comeback as the Shreyas Iyer-led side defeated Rajasthan Royals by 7 wickets at the Wankhede Stadium on Monday evening.

Set to chase a modest 153 run target, Kolkata lost its openers early. Thereafter Shreyas Iyer and Nitish Rana steadied the game. However, the skipper lost his wicket after playing an important 34-run. There on, Nitish Rana alongside Rinku Singh with their 66 run partnership took the game away from Rajasthan. While Rana scored 48 in 37, Riku Singh supported him with 42 in 43 as Kolkata won with 5 balls to spare.

In the first innings, Kolkata Knight Riders got off to a great start against Rajasthan Royals as they removed Devdutt Padikkal early on Umesh Yadav’s strike, Post that, Buttler who had a very slow approach today fell after scoring 22 runs. Only skipper Sanju Samson seemed to have an aggressive approach as he smashed a half-century to help them post a respectable target. However, he too fell on Shivam Mavi’s strike. Later, Shimron Hetmyer with his 27-run cameo, helped KKR post a modest 153-run-target.

Get all match-related updates in Hindi here

KKR VS RR LIVE: Celebrations after making a convincing comeback!

They together make it a 43-run partnership in 32 balls.

Rajasthan is in trouble as Nitish Rana and Rinku Singh close in on the 153-run target.

Kuldeep Sen gives 7 runs in the 16th over.

Boult to Shreyas Iyer, Caught by Samson, OUT!

Boult got an important wicket as the skipper walked back after scoring 34 in 32 balls. Rinku Singh comes in next.

Ashwin gives away only 4 runs in the 9th over.

Rana and Shreyas make it an 18-run partnership in 20 balls.

Krishna to Indrajith, CAUGHT by R Ashwin at fine-leg, OUT!

Indrajith perishes after scoring 15 in 16 balls. Nitish Rana is the new man in.

Krishna gives away 7 runs in the 6th over.

Finch walked back after scoring 4 in 7 balls. Shreyas Iyer walks in next.

Sen gives away 6 runs in 4th over.

While finch scores 3 in 3 balls, Indrajith adds 2 in 3 balls.

Kolkata restricted Rajasthan at 152/5 in 20 overs.

The last partnership of 37(18) between Ashwin and Hetmyer helped them achieve a respectable 153. Hetmyer scored 27 in 13 and Ashwin added 6 in 5.

RR could only score 47 runs in the last 5 overs and gave away 2 crucial wickets.

KKR VS RR LIVE: Back to Back WICKETS!

Mavi to Samson, CAUGHT by Rinku Singh, OUT!

Samson out after scoring 54 in 49. R Ashwin walks out.

Earlier, Parag was out after scoring 19 in 12 after his wicket fell Shimron Hetmyer walked in.

Sunil Narine gives away just 3 runs in the 16th over.

KKR VS RR LIVE: Samson steadies innings with a Fifty!

Anukul Roy to Karun Nair, CAUGHT by Rinku Singh, OUT on the first ball of 14th over.

Nair walks back after scoring 13 in 13 balls. Riyan Parag comes in next.

Roy gives away 10 runs in the 14th over. Sanju Samson smashes a fifty.

Southee to Buttler, Caught by Mavi near the boundary, OUT!

Buttler walks back after scoring 22 in 25 balls.

Tim Southee gives away 9 runs in 9th over.

Sunil Narine leaks 7 runs in the 8th over.

They together make it a 43 run partnership in 36 balls.

Rajasthan score 11 runs in the 6th over off Anukul Roy.

Rajasthan collect 3 FOURS in the 5th over as Umesh gave away 15 runs this over.

Umesh Yadav to Padikkal, CAUGHT & BOWLED by Yadav on the first ball of 3rd over!

Yadav gives Kolkata an early lead as Devdutt Padikkal walks back after scoring just a single in 7 balls.

Sanju Samson is the new man in.

Umesh throws a wicket-maiden over for Kolkata

Jos Buttler and Devdutt Padikkal began the innings for Rajasthan.

Buttler smashed a FOUR as Rajasthan Royals finish first over at 4/0.

For Kolkata Knight Riders there are 2 changes:

Anukul Roy comes in place of Venkatesh Iyer and Shivam Mavi is back.

Karun Nair is back in place of Daryll Mitchell

In their last match this season, Rajasthan Royals won by 7 runs and their star batter Jos Buttler had smashed a ton. However, in all the 27 meetings between these two teams of IPL, Kolkata have a slight upper-hand. While they have met 27 times, one match had no result. Kolkata won 13 and Rajasthan have won 12 times.

KKR VS RR PREVIEW: Make or break for Knight Riders as they take on Rajasthan

Kolkata Knight Riders(KKR) have now lost 5-consecutive matches in IPL 2022 and would look to come on the winning track when they take on a high-on-confidence Rajasthan Royals(RR) for the second time this season on Monday at Wankhede Stadium in Mumbai. Rajasthan dominated Kolkata in their previous meeting in the ongoing IPL season.

Kolkata Knight Riders have won just 3 in 9 matches and are placed 8th in the points table. Shreyas Iyer-led side started the season quite well but has been looking off-track for the past few matches. While Shreyas Iyer has been batting decently well, Russell has been occasionally good. The franchise's decision to sit out Pat Cummins after a few bad matches has failed to give any positive result. The side looked clumsy with Venkatesh Iyer's batting position and it could affect the team's performance in the next match as well. Read More

KKR VS RR LIVE: Welcome to today's live blog, get all your match-related updates here 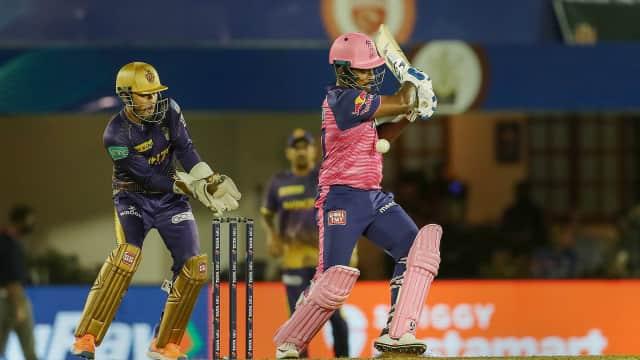