David Miller hit three effortless sixes which looked like action replays as Gujarat Titans, under their inspirational skipper Hardik Pandya, made a mockery of all the odds to reach the final of IPL 2022 with a seven-wicket win over Rajasthan Royals on Tuesday.

On a track that was two-paced, Royals rode on Jos Buttler's 56-ball-89 to post 188 for six in 20 overs, which seemed like a winning total considering the pressure of the occasion.

For a team which many tipped to finish last because of some out-of-the-box picks, turned out to be the most consistent and will now play the final in front of its home crowd at the Narendra Modi Stadium, with more than 100,000 people cheering them on.

No praise is enough for new 'Captain Cool' Pandya, who always looked in control even when things didn't seem to go his team's way.

One of the cleanest hitters, Pandya took the game deep with some well-placed boundaries which allowed Miller to take his time before unleashing five huge sixes -- three off the last over from Prasidh Krishna, when the bowler completely lost his nerve.

The best part about Pandya's captaincy was not taking any risks against the opposition's best bowler Yuzvendra Chahal (0/32 in 4 overs) but left it to his partner, who hit two huge sixes to ease the pressure.

McCoy used his back of the hand slower balls to perfection as only seven came off the over, leaving Krishna with 16 runs to defend but it took Miller three balls to nail it, all in the length slots.

At the start of chase, Wriddhiman Saha (0) was all at sea against Boult and edged one that moved in and then straightened after pitching. Matthew Wade (35 off 30 balls) and Shubman Gill (35 off 21 balls) didn't let it affect their batting as they added 72 for the second wicket to keep the chase on course.

Gill started slowly but then launched into Ravichandran Ashwin with a six over long-off followed by two boundaries on both sides of the square.

Wade also carried on briskly before a big mix-up ended in Gill's run-out.

Skipper Pandya started with a square cut off McCoy before the bowler got Wade in the same over when Buttler took a well-judged catch at deep mid-wicket.

Earlier, Buttler enjoyed copious amount of luck and displayed a fair bit of pluck during an innings of 89, which took Rajasthan Royals to a challenging total after being put into bat.

The Orange Cap-holder Buttler, who had failed to get his act together in the second half of the season, got off to a slow start but made full use of a couple of dropped catches during his knock, which was studded with 12 fours and two sixes.

The live broadcast of the Rajasthan vs Gujarat IPL match will be available on Star Sports 1 HD/ SD from 7:30 PM IST.

GT vs RR LIVE: Gujarat storm into the final

Miller hammers the first ball into the stands of the cow corner region for a BIG SIX.

A length ball and Miller smashes the second ball towards mid-wicket for FOUR. Poor choice of deliveries from Prasidh. First a half-volley and now a length ball.

Third consecutive six from Miller and he wins the match for Gujarat.

Obed McCoy continues and concedes a single each to both the batters.

McCoy misses a yorker by a whisker and Miller slaps it through extra cover for FOUR.

Miller heaves towards deep square leg for a single and completes his fifty. A DOT to end the over.

McCoy concedes seven runs in the over.

Yuzvendra Chahal [3.0-0-21-0] is back into the attack and concedes four singles off the first four balls. Miller smashes the 5th ball for a BIG SIX towards long-on boundary.

Obed McCoy [2.0-0-24-1] is back into the attack and concedes nine runs, including a boundary to Miller.

Ashwin continues and concedes 14 runs, including a boundary each to Hardik and Miller.

Obed McCoy, left-arm fast medium, comes into the attack and concedes 18 runs. But he takes the wicket of Mathew Wade.

Chahal continues and concedes seven runs, including a boundary to Wade.

Shubman Gill gets run out in a freak incident.

Ashwin, right-arm off break, comes into the attack and gets hammered for 17 runs, including a SIX and two back-to-back boundaries to Shubman Gill.

Ashwin leaks 17 runs in his first over.

Boult continues and Gill collects a single off the first ball.

Wade collects a couple of runs off the 3rd ball and ends the over with two back-to-back boundaries.

Prasidh Krishna, right-arm fast medium, comes into the attack and concedes 14 runs, including a boundary each to Gill and Wade.

Saha and Shubman Gill at the crease. Saha on strike. Boult opens the attack and gets the wicket of Saha off the second delivery.

Mathew Wade arrives at the crease and cuts the 2nd ball he faced over backward point for FOUR.

Bould concedes 4 runs in the over.

Yash Dayal bowls the last over and Parag edges the first ball towards third man boundary for a couple of runs.

Parag collects a single off the second ball towards long-on. Buttler hammers the 3rd ball into the stands for a SIX. Buttler collects a couple of runs off the 5th ball.

Buttler gets run out while taking a double off the last ball. One more ball for Rajasthan as the last ball was a no-ball.

Dayal bowls a WIDE and Parag tries to steal a BYES but Ashwin doesn't respond.

Ashwin will face the FREE HIT ball and collects a couple of runs.

Buttler goes for a biggie but manages only top-edge, and Rashid drops a tough running catch. A single taken.

Hetmyer holed out to long-on in search of a big hit.

Buttler ends the over with a FOUR and a SIX.

Shami leaks 13 runs in the over.

Alzarri Joseph comes back into the attack.

Yash Dayal [2.0-0-12-1] is back into the attack and Buttler smashes the first ball towards the backward square leg for FOUR.

Buttler smashes the second ball over long-off for FOUR. Buttler steers the low full toss through short third man for FOUR and completes his fifty.

Buttler cuts the 5th ball towards the backward point for FOUR. Buttler collects a single to end the over.

Rashid comes back into the attack and concedes three singles in the over.

Hardik Pandya continues and castles Padikkal off the first ball.

Hetmyer replaces Padikkal in the middle/

Buttler flicks the first ball towards square leg for FOUR.

Hardik concedes 8 runs in the over.

Sai Kishore continues and Padikkal smashes a SIX and two boundaries in the over.

Kishore concedes 9 runs in the over.

Sai Kishore continues and gets the wicket of Sanju Samson.

Kishore concedes four runs in the over.

Sai Kishore, Left-arm orthodox, comes into the attack and concedes 12 runs, including two boundaries to Samson.

GT vs RR LIVE: Rajasthan 55-1 at the end of the powerplay

Alzarri Joseph comes into the attack and Samson hammers the second ball down the ground for a SIX.

Samson pulls the 4th ball towards backward square leg for a flat SIX.

Rajasthan 55-1 at the end of powerplay

After failing to score off the first three deliveries, Buttler collects a single off the 4th ball.

Samson smashes the 5th ball down the ground for FOUR.

Samson flicks the last ball over mid-wicket for FOUR.

Shami continues and Buttler collects a couple of runs off the second ball.

Buttler drives the 4th ball, handsomely, through covers for FOUR.

Yash Dayal, left-arm fast medium, comes into the attack and concedes only two runs off the first five deliveries.

Jaiswal edges the last ball to the keeper, GONE.

Jaiswal and Buttler at the crease. Jaiswal on strike. Shami opens the attack and Jaiswal collects a single off the second ball.

Buttler drives on the up through extra cover for FOUR. 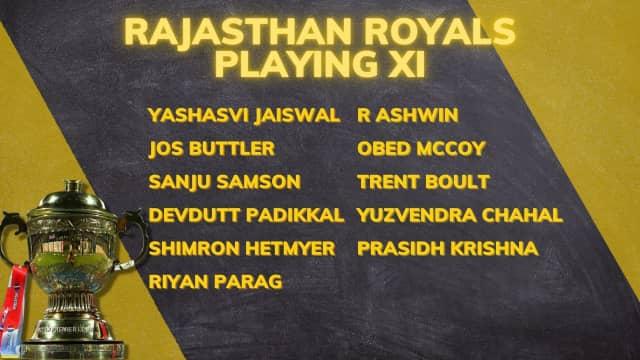 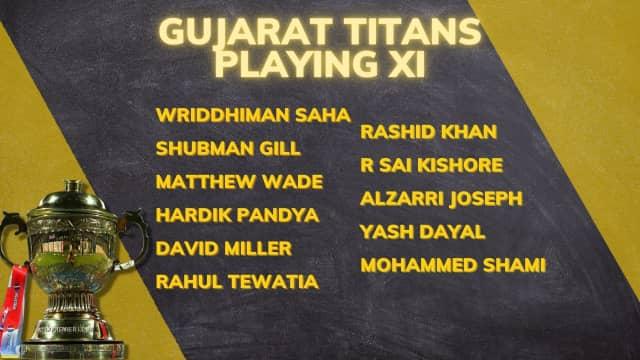 Hardik Pandya wins the toss and elects to bowl first

The live toss between Sanju Samson and Hardik Pandya is moments away, stay tuned with us for fastest update.

Short square boundaries here. It's got lots of grass cover and that means the quicks will be in play and expect it carry nicely for bowlers like Boult and individuals like that. I don't think there's going to be a lot of turn.

GT vs RR LIVE: Both the teams failed to defend totals during the league phase

Three of Titan's four defeats and four of Royals' five losses have come while setting up a target as the toss would also be a key area of concern.

The fact that the playoffs will be played on fresh tracks would put the seamers in focus and Pandya may look to bring in Alzarri Joseph to go alongside Lockie Ferguson and Shami.

The Titans had defeated the same opponents by 37 runs in the league stage but the inaugural edition champions have a spin-heavy attack to go with rich experience and they might prove to a tricky customer.

The Titans also have looked vulnerable as they suffered three defeats in last five matches, including an eight-wicket thrashing by Royal Challengers Bangalore in their previous outing, which would mean that the Pandya-led side has to step up.

The rain may play a spoilsport in Qualifier 1 as there are chances of rainfall in the evening in Kolkata. According to the website Accuweather, there is a 34 percent chance of rainfall at 8 PM IST. 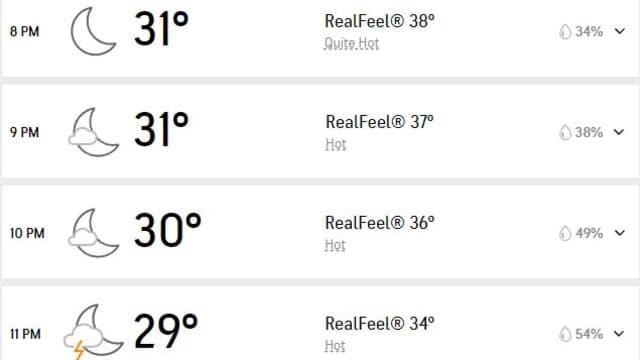 GT vs RR LIVE: Saha emerges as a key performer for Gujarat

The discarded India wicketkeeper-batter is batting with a new-found passion at the top of the order and has scored three half-centuries in nine matches to make up for Gill's lackluster run.

While the Afghan leg-spinner has been outstanding in the middle and death overs, India senior pacer Mohammed Shami has given them perfect starts, by being the highest wicket-taker (11 wickets) in the powerplay this season.

Saha, who has been making headlines since he was axed for Team India, will look to make a point as he along with Bengal teammate Shami play in front of their home crowd again.

Equipped with a lethal bowling attack and boasting a number of quality finishers, debutants Gujarat Titans will start as favourites against spin-heavy former champions Rajasthan Royals when the two teams face-off in the first IPL Qualifier, on Tuesday.

Captaining a team in the IPL for the first time ever, a fit-again Hardik Pandya has been a revelation this season as he led from the front with both bat and ball to ensure a top finish for his team in the league stage.

Apart from firing at number 4, Pandya has used his resources well, be it the death bowling of wily Rashid Khan or making his batting exploits count to go alongside the fiery duo of David Miller and Rahul Tewatia. Every little thing has fallen in place.

Their weak link was their top-order batting with highly-rated Shubman Gill failing to convert his starts but the addition of veteran Wriddhiman Saha has done wonders for the team.

The debutants who emerged as the most successful IPL team of the 2022 season, Gujarat Titans (GT) are set to face Rajasthan Royals (RR) in the fight for a direct berth for the IPL finals in Qualifier 1 at the Eden Gardens stadium on Tuesday. While the winner will reach the finals, the loser will get another chance in the Qualifier 2 of the IPL 2022

Hello and welcome to our live coverage of IPL 2022 Qualifier 1, to be played between Gujarat and Rajasthan. As both the teams are gearing up for today's match, stay tuned with us for all the live updates related to GT vs RR IPL match.