India may have had the upper hand for the majority of the 5th Test vs England in Birmingham but the hosts will go into the final day as the favourites to win the game. England ended Day 4 at 259/3 ad now need just 119 runs to win and draw the 5-match Test series 2-2.

Bumrah's boys were looking to consolidate their lead but the last 7 wickets fell for just 92 runs and India was bowled out for 245. England was set a 378-run target. No team has ever chased down a total that big in Edgbaston in the history of Test cricket.

Openers Alex Lees and Zak Crawley though were up for the task and set up the run chase for their side with a 107-run stand. However, England lost 3 quick wickets in a matter of just 2 runs and was reduced to 109/3.

That's when Joe Root and Jonny Bairstow got together and changed the course of the game. The pair scored runs freely and smashed boundaries at will and made sure England had no more hiccups. Root remained unbeaten on 76 while Bairstow went back not out on 72. The duo stitched together an unbeaten 150-run stand and India would have to do a lot more than just play good cricket to win the Test. 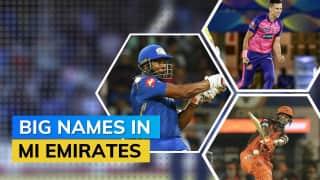