DebutantsLucknow registered their 4th win of the season as they handed Rohit Sharma’s Mumbai Indians their 6th defeat. Lucknow won by 18 runs at the Brabourne Stadium on Saturday.

Chasing a daunting 200-run target, Mumbai were never in the game as they lost wickets in regular intervals. The opening duo failed to perform yet again as Rohit Sharma and Ishan Kishan posted mere 7 and 13 before being removed by Avesh Khan and Marcus Stoinis. While in Dewald Brevis and Suryakumar Yadav Mumbai saw hope, but both lost their wickets after adding 31 in 13 and 37 in 27 balls. Kieron Pollard’s cameo of 25-run went in vain as Mumbai could only make 181/9 in 20 overs.

KL Rahul led from the front and batted throughout the innings to take his team's total to an imposing 199/4 against Rohit Sharma'sMumbai Indians. While the skipper scored an unbeaten 103 in 60 balls that included 14 boundaries, he got able support from Manish Pandey and Quinton de Kock who added 24 in 13 and 38 in 29 balls before being removed by Fabian Allen and Murugan Ashwin. Jaydev Unadkat got 2 wickets for Mumbai, apart from him, Allen, Ashiwn got a wicket each.

Earlier, Rohit Sharma's Mumbai Indians(MI) won the toss against KL Rahul's Lucknow Super Giants and decided to bowl first in Match 26 of the IPL 2022 season at the Brabourne Stadium in Saturday's first doubleheader.

Get updates in Hindi here

Disclaimer: Editorji is a part of the Sanjiv Goenka-owned RPSG group.

LSG VS MI LIVE: Will Mumbai be able to qualify for this year's play-offs?

MI failed to chase down the daunting 200-run target as Lucknow registered their 4th win in 6 games. This was the 6th straight loss for Mumbai who have failed to open their account in the ongoing season.

While Gowtham (substitute for KL Rahul) caught SKY after he scored 37 in 27 balls, Tilak Varma lost his wicket after adding 26 in 26.

Marcus Stoinis to Ishan Kishan, OUT!

Mumbai's top order fails as Ishan Kishan walks out after scoring 13 in 17 balls.

Avesh Khan comes into the attack and Ishan Kishan collects a single off the first.

Brevis heaves the second ball through mid-wicket for FOUR. He smashes the next ball straight down the ground for FOUR. Forget Baby AB for now he is stablishing himself as DB. AND as I write this, Brevis smashes the low full toss on the stumps straight to extra cover, GONE. A fiery inning comes to an end.


Mumbai 57-2 after 6 Overs. This is Mumbai's highest powerplay score this season.

Dushmantha Chameera comes into the attack and concedes only one run in his first three deliveries.

'Baby AB' Brevis dismisses the 4th ball straight down the ground for a SIX. Chameera replies with a bumper which goes over the head of Brevis for FIVE WIDES. Brevis hits the 5th ball through covers for FOUR. He smashes the last ball through mid-off for FOUR.

Skipper walks off cheaply yet again after Quinton de Kock caught him behind the stumps.

Rohit Sharma could only score 6 in 7 balls. Dewald Brevis comes out at no. 3.

LSG VS MI LIVE: The skipper's superb innings! KL became the first player to score 100 in his 100th I

LSG VS MI LIVE: KL batted throughout the Lucknow's innings to take the total to a commanding 200

Unadkat gets his second wicket as he sends back Deepak Hooda after he added 15 off 8 balls on the scoreboard for Lucknow.

KL Rahul smashes a 100* in balls, his first ton in the ongoing season. The skipper and KL Rahul through the Lucknow innings to take them to a commanding 195/3 in 18 overs. The skipper collected 14 boundaries including 9 fours and five sixes!

3rd 100 in his IPL career, 2nd against Mumbai Indians. 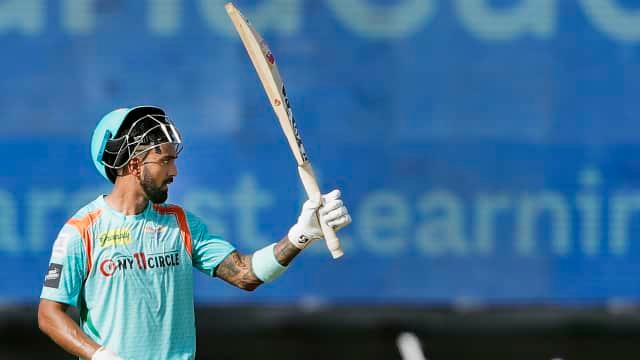 Stoinis walks out after skipper Rohit Sharma gets his catch. Stoinis scored 10 in 9 balls. KL Rahul stands tall for Lucknow at 85 in 47 balls.

Ashwin breaks the crucial 72(47) run partnership between KL Rahul and Manish Pandey, sends back Pandey after he added a 29-ball 38. Marcus Stoinis comes in at no. 4.

Lucknow is pouring boundaries against Mumbai as the KL Rahul-led side has so far smashed 13 boundaries in 9 overs.

Fabian Allen gets a crucial wicket of Quinton de Kock in the 6th over, the Lucknow opener walks back after scoring 24 in 13 balls.

LSG at 7 in the first over.

LSG VS MI LIVE: The trouble with the Mumbai team

The most successful IPL team, Mumbai Indians with 5 IPL titles is languishing at the bottom of the 10-team table without any points. The Rohit Sharma-led team, though has a reputation for crawling out of holes, has suffered as many as 5 back to back defeats this season. Even in 2015, the team lifted itself from 5 consecutive defeats at the beginning of the season and went on to win the IPL title. But there are slim chances of history repeating itself this season because of the 10-team format and they now need to buckle up.

Mumbai Indians won the IPL title in 2015 despite losing the first 5 matches of the season consecutively!

Will they be able to pull it off this year?

LSG VS MI LIVE: A look at the Playing XI

LSG VS MI LIVE: Changes in both teams

LSG VS MI LIVE: Brabourne Stadium is the venue today

LSG VS MI EXCLUSIVE: Know what the skipper has to say before the MI clash!

LSG VS MI LIVE: Welcome to today's live blog, get all your match-related updates here