Wriddhiman Saha's solid 67 not out after a top-class bowling performance set up Gujarat Titans' seven-wicket win over Chennai Super Kings in the IPL here on Sunday, securing a top-two finish in the team standings.

Gujarat bowlers put up a clinical show to restrict CSK to a below-par 133/5 despite a fine half-century by Ruturaj Gaikwad.

Saha, who struck eight boundaries and a six in his 57-ball knock, anchored the chase nicely to get Gujarat home in 19.1 overs.

While CSK were already out of the play-off race, the win for Gujarat guarantees them a top-two finish on the points table in their debut season, providing them with two opportunities to reach the final.

CSK tried to make a mini comeback by grabbing two quick wickets in the middle overs but it was too little and too late.

Saha, who was dropped by Ruturaj on 21, went hammer and tongs as he pummelled a listless CSK attack in the power-play.

The wicketkeeper-batter made his intent clear by striking three boundaries in the opening over off Mukesh Choudhary (0/28) and then played shots at will, including his only six in the fifth over.

However, CSK debutant pacer Matheesha Pathirana (2/24) trapped Gill in the front of the wickets in the eight over. Hardik Pandya (7) became Pathirana’s second victim as Gujarat slipped to 100/3.

But with no run-rate pressure, David Miller (15 not out off 20 balls; 1x4) and Saha completed the chase without any hiccups.

Earlier, CSK lost opener Dewon Conway (5) in the third over as Mohammed Shami (2/19) gave Gujarat the first breakthrough. Shami’s angled delivery from round the wicket moved away after pitching which Conway nicked it to wicket-keeper Wridhimman Saha.

CSK however suffered a middle-order collapse and could add only 24 runs in the last five overs.

Get all the match related updates in Hindi here

Simarjeet Singh [2.0-0-17-0] is back into the attack and concedes 9 runs, including a boundary to Miller.

Matheesha Pathirana [1.0-0-12-1] is back into the attack and gets the wicket of Hardik Pandya.

Miller joins Saha in the middle.

Prashant Solanki [1.0-0-6-0] is back into the attack and concedes four singles.

Moeen Ali continues and gets the wicket of Mathew Wade.

Hardik Pandya, right handed bat, comes to the crease and smashes towards cow corner for FOUR.

Moeen Ali, right-arm off break, comes into the attack and concedes five singles.

Matheesha Pathirana, right-arm medium, comes into the attack and traps Gill in front of the wicket off the first ball.

Mathew Wade arrives at the crease and smashes two boundaries.

Pathirana concedes 12 runs in the over.

Saha smashes a SIX and a FOUR in the over.

Mitchell Santner, Left arm orthodox, comes into the attack and concedes six runs, including a boundary to Gill.

Simarjeet Singh continues and concedes seven runs, including a boundary to Saha.

Saha and Shubman Gill at the crease. Saha on strike. Mukesh Choudhary opens the attack and concedes 12 runs in the over as Saha smashed three boundaries in the over.

Shami removed Dhoni in the last over as the table-toppers restricted Chennai to just 133 in 20 overs.

CSK could only collect 24 runs from the last 5 over and lost 3 wickets.

Shami to Dhoni, out Caught by Yash Dayal!

Dhoni walks back after scoring 7 in 10, Santner comes in next.

Alzarri Joseph to Shivam Dube, out Caught by Saha

Dube walks back for a duck, Dhoni comes in.

Joseph gave away just 2 runs in the 17th over.

Rashid Khan to Gaikwad, out Caught by Wade on the last ball of 16th over.

Gaikwad walks back after scoring 53 runs in 49 balls. Shivam Dube walks in.

Shami gave away 6 runs in the 6th over.

Sai Kishore to Moeen Ali, out Caught by Rashid Khan

Moeen Ali walked back after scoring 21 in 17 balls. N Jagadeesan is the new man in.

Rashid Khan gives away 7 runs in the 8th over.

Moeen Ali smashed 2 sixes back to back in the 6th over.

The 2 CSK cricketers together help CSK recover from a sluggish start with a 39(23) partnership.

Mohd Shami to Devon Conway, Caught behind by Saha!

Conway walks back after scoring mere 5 in 9 balls, Moeen Ali comes in next.

No change for Gujarat Titans

When Gujarat Titans sat for IPL auctions, no one had thought that their mediocre-looking line-up will take them this far. But, on Tuesday evening, the Titans became the first team to grab the playoff spot after trampling the starry line-up of Lucknow by a huge margin of 62 runs.

Here are the 3 things that have worked the best for the Hardik Pandya led team:

The absence of big names in the top-order never came to really haunt Gujarat Titans as they undeniably boast of one of the most fearful bowling line-ups this season. The presence of Rashid Khan, Mohd Shami, and Lockie Ferguson has been their biggest strength. The 3 bowlers have together taken 43 wickets for Gujarat so far. Read More

The defending champions Chennai super kings failed to make the playoffs of the 2022 season of IPL after losing their game to Mumbai Indians.

This is only the second time in IPL history that Chennai failed to qualify.

MS Dhoni dropped a bombshell just one day ahead of IPL 2022 kick-off that he has handed over the CSK captaincy to Ravindra Jadeja. The team under Jadeja's leadership & failed to perform up to their mark. A few matches later, Jadeja handed back the captaincy duties to Dhoni. Read More

Gujarat Titans, the only qualified team for the IPL 2022 playoffs will take on Chennai Super Kings for the second time in this season on Sunday at Wankhede Stadium, Mumbai.

Hardik Pandya-led Gujarat Titans have been enjoying their maiden IPL season as they have won 9 out of 12 matches so far and and are placed at top on the points table. Gujarat could make some changes in the playing 11 as they don't have anything to lose and a win will only guarantee their top-2 finish on the points table.

On the other hand, the IPL season has been a nightmare for defending champions Chennai Super Kings as they are placed at the bottom half of the points table and have won just 4 in 12 matches. MS Dhoni-led side is already out of playoff contention. Read More

Welcome to the live blog of the first match of the final doubleheader.

Gujarat is set to take on Chennai in their 2nd last league game. Follow for updates. 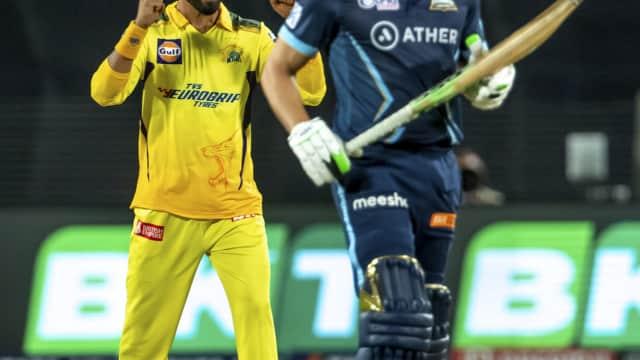