Maharashtra crisis LIVE updates:  Another act has been added to the political 'Maha'drama in Maharashtra. Uddhav Thackeray has left the chief minister's official residence with his wife and two sons. The family was seen leaving the house with a convoy of cars carrying their luggage.

A little before that visuals emerged of luggage being moving from the official residence of chief minister Uddhav Thackeray to his personal residence.

Meanhwile, a large crowd of Shiv Sainiks gathered outside Matoshree to show their support for Uddhav Thackeray.

How the late-night drama unfolded in Maharashtra

Overwhelming support for Uddhav Thackeray as he reaches Matoshree

Another act has been added to the political 'Maha'drama in Maharashtra. Chief minister Uddhav Thackeray's belongings are being shifted from Varsha Bungalow, his official residence to Matoshree, his personal residence.

His wife and two sons were seen leaving chief minister's official residence with a convoy of cars carrying their luggage.

Meanhwile, a large crowd of Shiv Sainiks gathered outside Matoshree to show their support for Uddhav Thakceray.

Eknath Shinde on Twitter: In the last 2.5 years, only NCP and Congress have benefited while Shiv Sena has suffered. Other constituents of Maha Vikas Aghadi strengthened but Shiv Sena weakened. Important to break this alliance to save Shiv Sena. Time of take decision in interest of Maharashtra

Maharashtra political crisis: CM says he is willing to resign 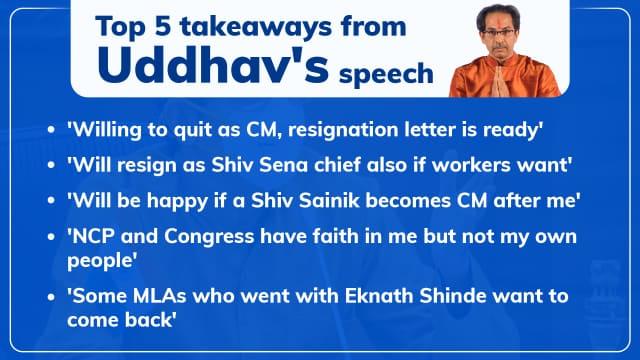 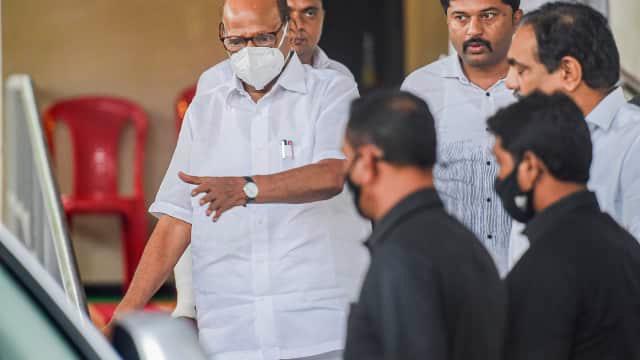 Maharashtra crisis | 'Ready to resign as CM but...': Uddhav Thackeray

Rebel Shiv Sena leaders have elected Eknath Shinde as the legislative party leader of Maharashtra Assembly. Shinde was removed from the post by Shiv Sena on Tuesday after he decamped with a few other MLAs on Monday night.

Shinde claims he has support of 40 MLAs, Shiv Sena has a total of 55 MLAS in the Maharashtra assembly

Sanjay Raut on Maharashtra crisis: attempts being made to kidnap MLAs

When such a situation forms in any state, Vidhan Sabha is dissolved. Attempts being made to kidnap MLAs & take them outside. You would've heard MLA Nitin Deshmukh, how was he thrashed, wrongfully hospitalised, treated & injected. He says it was an attempt to murder him: Sanjay Raut

Kamal Nath says his meeting with chief minister Uddhav Thackeray will be held online as the Sena leader has tested positive for coronavirus.

Multiple sources based reports claim that Maharashtra chief minister Uddhav Thackeray may quit after the Maha Vikas Agadhi cabinet meets in Mumbai this afternoon. With the lack of numbers in the Maharashtra Assembly, CM Uddhav Thackeray could step down today, say the unnamed sources sources.

Kamal Nath on Maharashtra crisis: Congress MLAs not for sale

Amid the Shiv Sena-led Maharashtra government facing a crisis following the revolt by a section of its MLAs, senior Congress leader Kamal Nath on Wednesday said his party is united and its MLAs are "not for sale". Nath, who was on Tuesday appointed as the AICC observer in Maharashtra in the wake of the political turmoil in the state, and NCP chief Sharad Pawar are expected to meet Chief Minister and Sena president Uddhav Thackeray around noon. The Maharashtra cabinet meeting is also scheduled later in the day. The Congress shares power in Maharashtra with the Shiv Sena and NCP.

Even as rebel Shiv Sena leader Eknath Shinde along with some party MLAs have moved to Guwahati in Assam, Sena MP Sanjay Raut on Wednesday said he has been holding discussions with Shinde and the talks are "positive".

Talking to reporters in Mumbai, Raut said Shinde has not put forth any conditions before the party, and that discussions are also underway with other Sena leaders who are with Shinde.

Raut expressed confidence that Shinde and other rebel MLAs will be back into the party fold, and said their “misunderstandings will be addressed”.

Amid conflicting reports about the numbers of MLAs who are supporting him, rebel Shiv Sena leader Eknath Shinde has claimed that 40 MLAs are with him at a hotel in Guwahati.

He also added that 10 more MLAs are expected to join the group.

Speaking to a TV channel over phone, Maharashtra minister Sandipan Bhumare, who is among the dissidents, said, "We do not have any complaints against the Shiv Sena leadership. We have raised our complaints with Chief Minister Uddhav Thackeray, that it was getting difficult to work with the NCP and Congress ministers. It was very difficult for us to get our proposals and work requests approved from their ministers.” To a query, Bhumare said he was given a cabinet portfolio and was satisfied with it.

Shiv Sena MLA Pratap Sarnaik on Wednesday said the party should renew ties with the BJP, as the Uddhav Thackeray-led Maharashtra government faces a crisis following a revolt by a section of Sena MLAs led by Eknath Shinde.

Sarnaik, the MLA from Thane's Ovala-Majiwada constituency, has been facing a probe by the Enforcement Directorate in a money laundering case. He had last year written a letter to Chief Minister and Sena president Uddhav Thackeray, saying the party should team up with the BJP to save its leaders from action by central agencies.

Maharashtra Governor Bhagat Singh Koshyari was on Wednesday admitted to a private hospital in south Mumbai after testing Coronavirus positive, an official said.

Koshyari, who was always seen wearing face masks at public events, has been admitted to the Reliance Foundation Hospital, the official said.

Maha crisis: Shinde lands in Assam, says 40 Sena MLAs are with him

Eknath Shinde, the leader of rebellion in ruling Shiv Sena on Wednesday claimed he has 40 MLAs with him.

Shinde, who arrived at the Guwahati airport, spoke to reporters for the first time since his decision to rebel against his own party.

On late Monday night, Shinde had left Mumbai with several Sena MLAs and stayed at a hotel in Gujarat's Surat city.

However, after holding talks with BJP leaders, he decided to shift to Guwahati.

Speaking to reporters outside Guwahati airport, Shinde said, “Here 40 MLAs are with me. Additional 10 MLAs will join me soon. I do not want to criticise any one. We are keen on continuing the Sena founded by late Balasaheb Thackeray,” he said.

Maharashtra crisis: Shinde, other rebels move to Guwahati in Assam

Nearly 30 rebel MLAs of Shiv Sena along with their leader Eknath Shinde left their hotel in Surat and were flown to Guwahati in Assam. On Tuesday, Shiv Sena leaders Milind Narvekar and Ravindra Phatak, sent by Maharashtra Chief Minister Uddhav Thackeray, held discussions with the rebels at the hotel in Surat.

Maha Vikas Aghadi leaders get into a huddle

Cabinet ministers Balasaheb Thorat and Ashok Chavan of the Congress met Thackeray, who heads the Shiv Sena, at his official residence 'Varsha' in south Mumbai, where state NCP president and minister Jayant Patil was also present.

All eyes are on NCP president Sharad Pawar, the chief architect of the Shiv Sena-led ruling coalition Maha Vikas Aghadi (MVA) who is likely to arrive in Mumbai soon from New Delhi, where earlier in the day he convened a crucial meeting of opposition parties to decide on a common candidate for the next month's presidential polls.

Maharashtra BJP president Chandrakant Patil has admitted that some MLAs of the party have met Shiv Sena leader Eknath Shinde, who is camping in a Surat hotel, but in their "personal capacity". 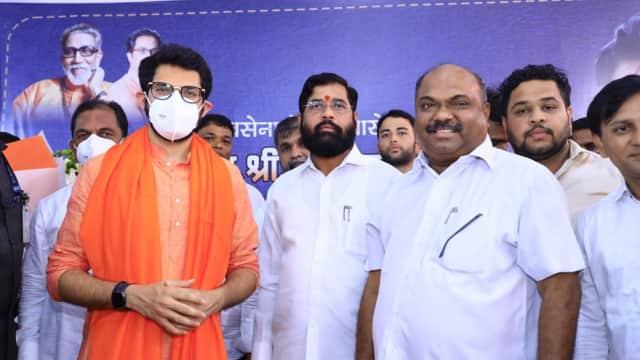 Amid reports of him decamping, Shiv Sena leader Eknath Shinde has tweeted that he his Balasaheb Thackeray's staunch Shiv Sainik and he will never cheat on Balasaheb's teachings for power.

There are reports that the Maharashtra minister is staying at a hotel in Surat with some party MLAs. He is reportedly displeased with current party leadership and has alleged that they are sidelining him.

Maharashtra BJP: no hand in Sena crisis but will consider if Eknath Shinde wants to join us 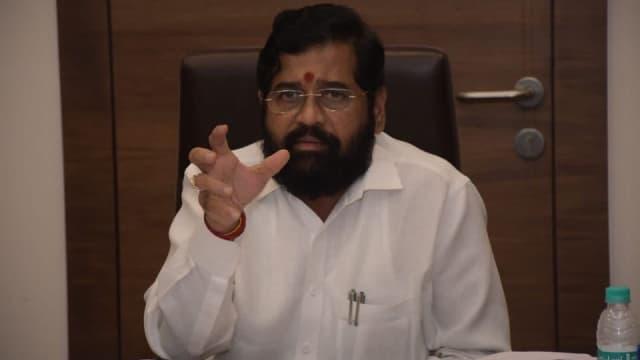 Problems have cropped up in their party only due to instigating statements of Sanjay Raut. People won't tolerate it - Eknath Shinde's rebellion is an example. Sanjay Raut should speak politely. He doesn't need to speak harshly on every matter: Maharashtra BJP chief Chandrakant Patil

What happened in the Maharashtra MLC polls

The opposition BJP on Monday won all five seats it contested in the state Legislative Council election.

Ten Council seats were up for grabs and 11 candidates were in the fray for the elections, which came days after the Rajya Sabha polls, which saw the BJP handing an embarrassing defeat to the Shiv Sena-led ruling coalition.

While the BJP had enough numbers in the Assembly to get four nominees elected to the Council easily, its fifth candidate Prasad Lad, too, made it to the Upper House of the state legislature after securing support from MLAs outside his party's pool of legislators.

As two candidates each of MVA allies Shiv Sena and NCP, including former BJP leader Eknath Khadse, also won, Congress leader and minister Balasaheb Thorat said the party can not blame others as its own MLAs did not vote for its candidate.

Maharashtra minister Eknath Shinde and some other Shiv Sena MLAs from the state are camping at a hotel in Gujarat's Surat city, PTI sources said on Tuesday, a day after the Sena-led Maha Vikas Aghadi faced a setback in the Maharashtra Legislative Council polls.

The MLAs, who are seemingly unhappy with their leadership, arrived in Surat on Monday night and are camping at the Le Meridian Hotel

Maharashtra minister and senior Shiv Sena leader Eknath Shinde has gone incommunicado, a party leader said on Tuesday, a day after the ruling Maha Vikas Agahdi (MVA) suffered a setback in the state Legislative Council polls by losing one out of the six seats it contested.

The development could rattle the MVA, comprising the Shiv Sena, NCP and Congress, as some Sena MLAs are believed to be in touch with Shinde.

The leader did not divulge the number of MLAs who could be with Shinde and their details.