Updated: Feb 28, 2019 02:54
|
Editorji News Desk
Here's a wrap of major stories from morning newspapers... Tension in the air... scream the headlines on all the major papers after an IAF pilot is captured by Pakistan following an air combat. The nation prays for the safe return of Wing Commander Abhinandan Varthaman who jet went down in Pakistan Occupied Kashmir. While Pakistan's Balakot became household name in India after air force's strike on a Jaish camp there, The Indian Express has reported on the situation in the othe rBalakote -- on Indian side. The village in Uri in north Kashmir is living under cloud of uncertainty amid India-Pak tensions. The villagers' dilemma whether to leave their house for a safer location or wait a little longer. The Hindustan Time has a story on the Haryana Assembly passing a controversial bill which opens up nearly 30,000 hectares of protected land in Aravali, Shivalik foothills of Haryana for development. The Times of India has as one of its main stories, that the Centre has moved the Supreme Co 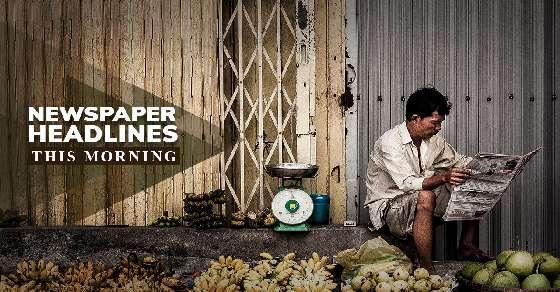