Updated: May 30, 2019 02:25
|
Editorji News Desk
Prime Minister Narendra Modi on Wednesday paid tributes to Mahatma Gandhi at the Rajghat ahead of swearing-in ceremony in the evening. The PM then went to Sadaiv Atal Samadhi, memorial of late PM and BJP patriarch Atal Bihar Vajpayee to pay his respects. Several senior BJP leaders also paid respects at Atal memorial. Next stop for PM was the National War Memorial near India Gate. The monument is dedicated to soldiers killed in service of the country over the decades. PM Modi and his Cabinet will take oath at an elaborate ceremony at Rashtrapati Bhavan at 7 pm. 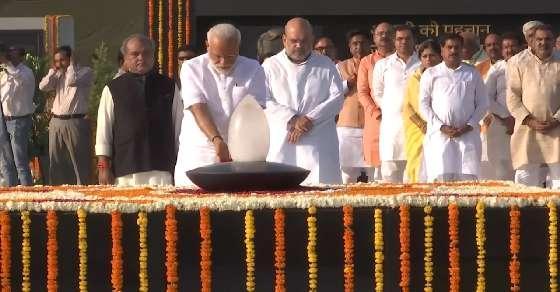