Here's a wrap of the top stories from morning newspapers

The central government is likely to fix a threshold limit of 55 litre/day per person as assured household water supply under the PM Modi's ambitious water guarantee plan. Hindustan Times has reported. The govt will also set up a dedicated fund for its mission to provide piped water to every rural Indian household by 2024. The water fund will likely be modelled on the lines of a similar one for Swachh Bharat Abhiyan, the national sanitation scheme, called the Swachh Bharat Kosh.

The Enforcement Directorate told the Supreme Court on Wednesday that money laundering in the INX Media case was still going on, The Times of India reported. The ED said that it had collected credible evidence against former finance minister P Chidambaram. Refuting the allegation of witch-hunt, the agency said that it had cogent evidence to show it is a serious case of money laundering and that there is a prima facie case against Chidambaram

The Indian Express has reported on how the Sher-e-Kashmir International Conference Centre that hosted conferences and concerts before August 5 has turned in to a jail for the very VIPs that built and ran it. Attached to the Centaur hotel, today, it’s a “subsidiary jail”, its Reception lobby doubles up as the meeting area of a prison. Centaur is where almost the entire top rung of Kashmir’s mainstream is detained. Only close relatives are allowed but not before they have applied to a Deputy Superintendent of Police.

Business paper Mint has reported that Toyota Motor Corp. and Suzuki Motor Corp. deepened their ties by buying small stakes in each other. While Japan’s biggest automaker Toyota will acquire a 4.94% stake in Suzuki for about 96 billion yen, the latter will buy 48 billion yen worth of shares in Toyota, the companies said in a joint statement 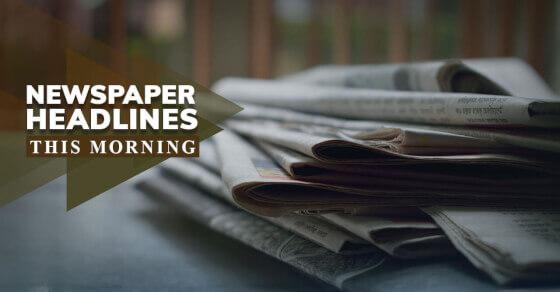