Updated: Jan 28, 2019 02:59
|
Editorji News Desk
The Indian cricket team is on a Kiwi hunt and have tamed New Zealand in the first 2 ODIs. Shortly after handing the hosts a 90 run loss at Bay Oval, New Zealand police issued a funny warning against Virat Kohli and company. 'Police would like to issue a warning to members of the public about the exploits of a group touring the country at the moment. Witnesses report seeing this group badly assault an innocent looking bunch of New Zealanders in both Napier and Mt Maunganui in the last week. Extra care should be taken if you are carrying anything that looks like a cricket bat or ball. 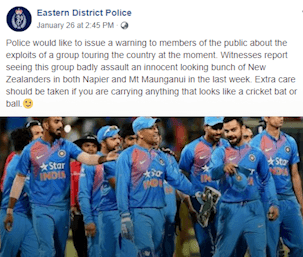