Updated: Apr 30, 2019 06:23
|
Editorji News Desk
After MHA notice to Rahul Gandhi over his citizenship, Congress spokesperson Randeep Surjewala hit out at the BJP government saying that they have ran out of new ideas and are resorting to such malicious accusations against the Congress President. He also said that the entire world knows that Rahul Gandhi is an Indian citizen by birth. "Bankruptcy of new ideas and new narratives is now making them lose the political balance by resorting to such malicious and fallacious allegations on the citizenship of Rahul Gandhi. The entire world knows that he is an Indian citizen by birth," said Surjewala. 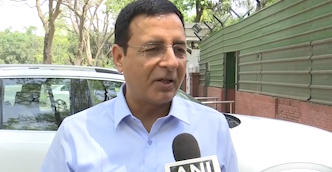