'Learn from him': Savarkar's portrait unveiled in Goa Assembly

Updated: May 28, 2019 10:49
|
Editorji News Desk
Goa Chief Minister Pramod Sawant unveiled a portrait of Vinayak Damodar Savarkar in the State Secretariat on his birth anniversary. Urging the people to read Savarkar's autobiography, Sawant said some people have forgotten the torture endured by "Veer" Savarkar during his incarceration in the Cellular Jail in the Andaman Islands as well as his contribution to the Indian freedom struggle. He also said that the new generation should learn from these leaders. Savarkar was tried and acquitted by a court for conspiracy to assassinate Mahatma Gandhi. 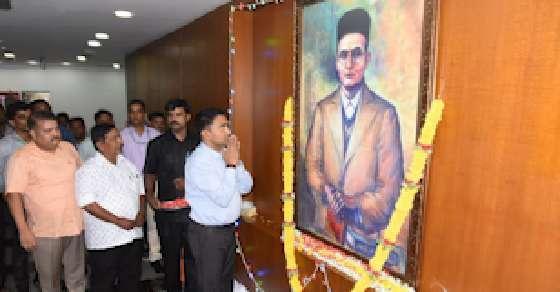 'Learn from him': Savarkar's portrait unveiled in Goa Assembly