Japan's emperor abdicates throne and hands it over to son

Updated: Apr 30, 2019 09:58
|
Editorji News Desk
Emperor Akihito has become the first monarch to abdicate the Chrysanthemum Throne, and hand it over to his son to usher in a new era. Emperor Akihito will abdicate in favour of 59-year-old Crown Prince Naruhito in a set of solemn ceremonies, also kicking off the new imperial 'Reiwa' era that will last throughout the new monarch's reign. The ritual-bound process began on Tuesday morning with the emperor, dressed in golden-brown robes and a black headpiece, "reporting" his abdication to his ancestors and the Gods at several "sanctuaries" at the palace, while the main event will be held at 5:00 pm local time, when the 85-year-old emperor will formally step down in a 10-minute ceremony. 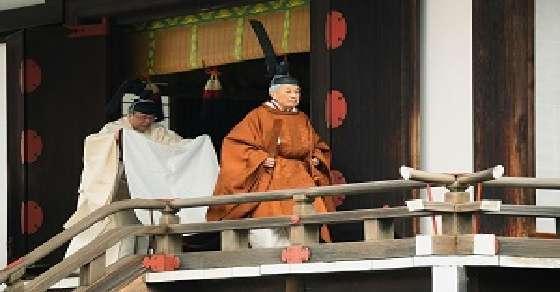 Japan's emperor abdicates throne and hands it over to son