An urban climber known as the 'French Spiderman' was detained by police after scaling a high rise building in Frankfurt on Saturday. Alain Robert is known for climbing some of the world's tallest structures without safety ropes or permission. Robert took 20 minutes to climb the 153-metre Skyper building in the heart of Germany’s financial capital on Saturday. In October last year he was arrested after scaling the 202-metre Salesforce Tower, which is one of London’s tallest buildings. 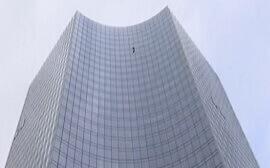