Brinkmanship not statesmanship: India replies to Imran's speech at UN

Vidisha Maitra, First Secretary in the Ministry of External Affairs, exercised India's right to reply to Pakistan Prime Minister Imran Khan's speech at UNGA on Saturday. In a scathing rebuttal from India's side, she said, Pakistan PM Imran Khan's threat of unleashing nuclear devastation qualifies as brinkmanship not statesmanship.

Maitra added that for someone who was once a cricketer and believed in the gentleman’s game, Imran's speech bordered on crudeness of the variety that is reminiscent of the guns in Darra Adam Khel, a dying gun market in Pakistan.

"Will Pakistan acknowledge that it is the only govt in the world that provides pension to an individual listed by the UN in the Al-Qaeda and Daesh sanctions list?"

"Now that PM Imran Khan has invited UN observers to Pakistan to verify that there are no militant organisations in Pakistan the world will hold him to that promise", she said. 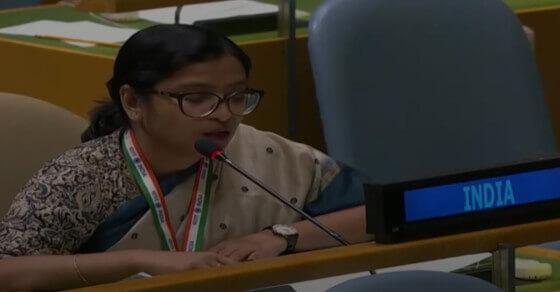 Brinkmanship not statesmanship: India replies to Imran's speech at UN