Anand Mahindra tweets about 'perils of having a smart wife'

Updated: Apr 30, 2019 07:53
|
Editorji News Desk
Business tycoon, Anand Mahindra's tryst with Twitter never fails to amuse. He recently tweeted a picture from a newspaper article about a man who faked being dumb and deaf to avoid listening to his wife.Even though the article was fake, what caught the attention of netizens was the caption he posted. He asked his wife if she could be fooled like that to which she gave a savage reply! 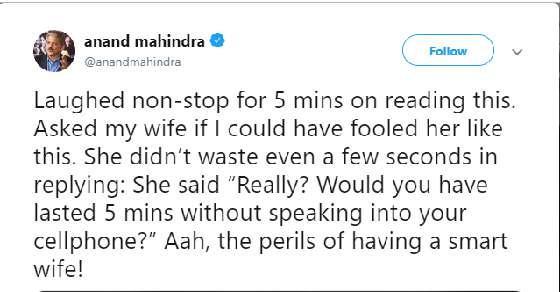 Anand Mahindra tweets about 'perils of having a smart wife'