A fired-up Virat Kohli roared back to form with a fine half-century as Royal Challengers Bangalore stayed alive in the IPL playoff race with a thumping eight-wicket win over table-toppers Gujarat Titans here on Thursday.

This was after skipper Hardik Pandya scored a gritty 47-ball 62 to lift GT to a competitive 168 for five after opting to bat.

By virtue of this win, RCB moved to fourth place in the standings with 16 points but will have to wait for the Delhi Capitals-Mumbai Indians game on Saturday to know their fate. A loss for Delhi would ensure RCB a play-off berth.

As the 'Kohli Kohli' chants suggested, the whole of Wankhede and probably the country wanted to see the former India captain back amongst the runs and with a little bit of luck going his way, he was back playing the shots he is known for.

When Kohi picked Mohammed Shami for two lofted boundaries over the bowler's head and cover in the third over, it looked it would be his night. His next four was a streaky one off Hardik who bowled with the new ball.

The very next ball, Kohli was at his animated best as he whipped Hardik towards square leg with Rashid Khan missing a tough chance in the deep.

A sign of his growing confidence was an aerial straight drive off Rashid. Kohli was quick on his feet both against Rashid as well as the pacers. The Indian superstar brought up his second fifty of the season by whipping a full ball off Rashid over deep midwicket.

With Kohli on song, Du Plessis played his part perfectly and kept rotating the strike besides an odd boundary.

After the captain's dismissal, Maxwell joined Kohli and went ballistic from ball one. The Australian's cameo included a reverse scoop shot off Hardik that went all the way. After collecting his second six off Rashid, Kohli tried one too many and got stumped in the 17th over but the job had been well and truly done by then.

Earlier, Hardik lifted GT to a competitive total. Coming into the game with a string of low scores, he warmed up nicely for the play-offs with a well crafted fifty even though he was not at his fluent best.

RCB limited GT to 72 for three in 10 overs, largely due to their brilliance in the field despite Wriddhiman Saha's (31 off 22) threatening stay in the middle.

Saha provided another brisk start with some clean hitting but his opening partner Shubman Gill perished cheaply. The right-hander poked at a good length ball and Maxwell, standing at a widish first slip, plucked a stunning one handed catch diving to his right.

Matthew Wade, who has not been at his explosive best in the IPL, fell to a controversial call which also attracted empathy from Kohli. Wade was sure that he underedged a sweep shot off Maxwell and took no time in reviewing the on-field decision, which was out.

Both the teams have made one change each in their Playing XIs.

Lockie Ferguson [1.0-0-9-0] is back into the attack and Maxwell smashes the first ball down the ground for FOUR.

Maxwell guides the third ball over short third man for FOUR. Maxwell pulls the last ball but manages only top-edge and ball flies over the keeper for FOUR.

Bangalore win the match by 8 wickets

Yash Dayal [3.0-0-25-0] is back into the attack and Maxwell collects a couple of runs off the first ball.

Maxwell powers the 3rd ball over extra cover for FOUR.

Bangalore concedes 10 runs in the over.

Rashid Khan continues and Kohli smashes the second ball for a SIX.

Kohli gets STUMPED in search of a second big hit.

Karthik joins Maxwell in the middle.

Hardik Pandya [2.0-0-17-0] is back into the attack and Kohli collects a single off the first ball.

Maxwell wallops the second ball down the ground for a SIX. He smashes the 3rd ball towards the backward square leg boundary for FOUR.

Maxwell smashes the fifth ball for a SIX.

Pandya leaks 18 runs in the over.

Rashid Khan [2.0-0-19-0] is back into the attack and concedes only a single each to Faf and Virat respectively.

Maxwell arrives at the crease and survives by a luck as the ball kissed the leg-stump and goes for FOUR BYES.

Both Kohli and Faf maneuver the strike easily. Faf smashes 5th ball for FOUR towards the cow corner boundary for FOUR.

Ferguson concedes 9 runs in the over.

Sai Kishore continues and concedes six runs in the over.

Rashid Khan [1.0-0-9-0] is back into the attack and Kohli smashes the first ball for a SIX. With this he completes his fifty in 33 deliveries.

Rashid concedes 10 runs in the over.

Sai Kishore continues and concedes five runs in the over.

Dayal concedes 11 runs in the over.

Yash Dayal continues and Kohli fails to score off the first two deliveries.

Dayal concedes 6 runs in the over.

Rashid Khan, right-arm leg break, comes into the attack and concedes nine runs, including a boundary to Kohli down the ground.

Hardik leaks 14 runs in the over.

Shami continues and Kohli smashes two boundaries in the over.

Shami leaks 18 runs in the over.

Kohli and du Plessis at the crease. Kohli on strike. Shami open the attack and concedes five runs, including a boundary to Faf du Plessis.

Hazlewood bowls the last over and Pandya smashes the first ball for a SIX.

Pandya collects a couple of runs off the second ball follows by a single off the third.

Rashid smashes the 4th ball for  SIX towards deep square leg follows by a single towards short third man.

Pandya collects only a single off the last delivery.

Hazlewood concedes seven runs in the over.

Wanindu Hasaranga [3.0-0-20-0] is back into the attack and gets the wicket of David Miller.

Hasaranga concedes 5 runs in the over.

Shahbaz Ahmed [1.0-0-6-0] is back into the attack and concedes nine runs, including a SIX to David Miller.

Glenn Maxwell [3.0-1-10-1] is back into the attack and concedes four runs off the first three balls.

Miller smashes the 4th ball down the ground for a SIX while whacks the next towards mid-wicket boundary for another SIX.

Maxwell leaks 18 runs in the over.

Siddharth Kaul comes back into the attack and concedes four runs off the first five deliveries.

Hasaranga comes back into the attack and concedes a single off the first ball.

Hasaranga concedes 6 runs in the over.

Glenn Maxwell comes back into the attack and concedes two runs off the first three deliveries.

Maxwell concedes 8 runs in the over.

Harshal Patel, right-arm fast medium, comes into the attack and Hardik collects a couple of runs off the first two deliveries.

Saha gets runout off the 3rd delivery.

Harshal concedes six runs in the over.

Hasaranga, right-arm leg break, comes into the attack and Saha smashes the first ball for FOUR.

Hasaranga concedes nine runs in the over.

Mahipal Lomror, Left arm orthodox, comes into the attack and concedes 5 runs off the first 5 deliveries.

Hardik smashes the last ball over long-on for a SIX.

RCB vs GT LIVE: A WICKET MAIDEN from Maxwell

Maxwell continues and traps Mathew Wade in front of the wicket off the second ball.

Hardik Pandya arrives at the crease after Wade's dismissal.

A WICKET MAIDEN from Maxwell.

Hazlewood continues and Mathew Wade smashes the first ball through the left of mid-on fielder for FOUR.

Wade advances down the track and smashes the 3rd delivery of the over towards deep mid-wicket for a SIX.

Wade drives the 5th ball through covers for FOUR, a poor fielding effort from Hasaranga.

A single for Wade to end the over.

Hazlewood concedes 15 runs in the over.

Glenn Maxwell comes into the attack and concedes only two singles in the over.

Josh Hazlewood comes into the attack and Saha collects a single off the second ball.

Hazlewood concedes only a single in the over.

Shahbaz Ahmed bowls the second over and Gill collects a single off the first ball.

Saha slog-sweeps the 3rd ball towards deep mid-wicket for FOUR follows by a single towards square leg.

Saha and Shubman at the crease. Saha takes the strike and Siddharth Kaul opens the attack  and Saha smashes the first ball for FOUR.

Saha smashes the 4th ball for a SIX while ends the over with another boundary. 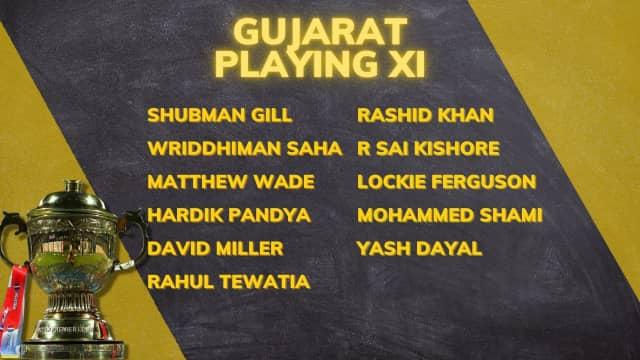 Hardik Pandya wins the toss and elects to bat first

According to Graeme Smith, today's pitch is the hardest he has seen at the Wankhede in this tournament.

Glenn Maxwell and Rajat Patidar have been getting starts but failed to convert them into big scores.

On the bowling front, Harshal Patel and Wanindu Hasaranga have been brilliant for RCB. In fact, when all other bowlers were taken to task by Punjab batters in their last match, the duo bowled decent spells and in the process picked up four and two wickets respectively.

RCB, however, would be concerned over the form of Josh Hazlewood and Mohammed Siraj as they leaked runs against Punjab.

But du Plessis would be hoping for one complete performance from his side to keep RCB in the hunt.

RCB vs GT LIVE: What could hurt Bangalore's playoffs chances?

RCB have had a mixed bag this season, registering seven wins and six losses to occupy the fifth spot with 14 points from 13 matches.

But what could hurt RCB is their net run rate of -0.323. A win against GT would move them to 16 points but that might not be enough as they also need a few favourable results going their way.

Delhi Capitals, who are currently at the fourth spot, can also secure 16 points if they beat Mumbai Indians in their last match and they have a much better net run rate than RCB at +0.255.

With back-to-back wins, RCB had the momentum going their way but that fizzled out after a big 54-run loss to Punjab Kings in their last match. RCB vs GT LIVE: Gujarat would look to continue their winning momentum

Runaway leaders Gujarat Titans would look to continue their winning momentum ahead of the play-offs while Royal Challengers Bangalore need a big victory to keep their last-four stage hopes alive when the two teams face each other in their final IPL league match.

Newcomers GT have so far had a dream opening season as they are already assured of a top spot in the standings with 20 points from 13 games. 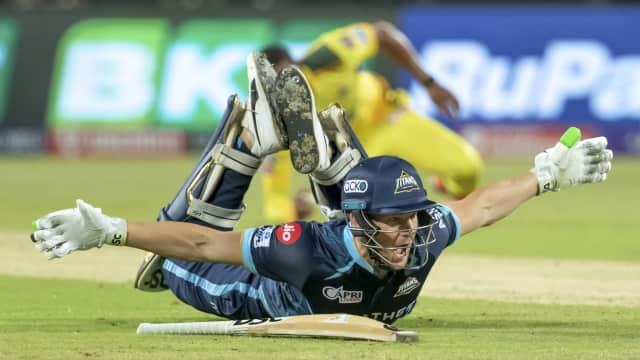 At the business end of the competition, Royal Challengers Bangalore will take on Gujarat Titans in their last match on Thursday at Wankhede Stadium, Mumbai.

Faf du Plessis-led Royal Challengers Bangalore will have to win against Gujarat as they are placed 5th on the points table with 14 points. Delhi Capitals also have 14 points and are placed 4th as RCB lost their previous match. If RCB win against GT and DC lose to MI, RCB will have 16 points and will qualify for the playoffs but if Delhi win, RCB's chances to qualify are uncertain as their run rate of - 0.323 is not good enough. Hello and welcome to our live coverage of the Bangalore vs Gujarat IPL match. As both the teams are gearing for the RCB vs GT match, stay tuned with us for all the live updates for RCB vs GT match.