IPL 2022, DC Vs PBKS HIGHLIGHTS,  Delhi Capitals (DC) vs Punjab Kings (PBKS) IPL Match 64 Live Scorecard and Updates:
Delhi Capitals keep their playoff hopes alive as they made it to the 4th spot on the points table with a thrilling win over Punjab Kings in IPL 2022. Marring Punjab’s chances, Delhi won their 7th game of the season by 17-runs at the Wankhede stadium.

Chasing 160, Punjab, though, got a start, a terrible collapse turned out to be their major setback. The Delhi spinners wreaked havoc on Mayank Agarwal’s team as they lost 3 wickets in the powerplay itself. Thereafter Jitesh Sharma waged a lone battle, but failed to do much as wickets kept falling on the other end. In the following 6 overs Delhi could only score 14 runs and lost 5 more wickets. Sharma’s 44 in 34 ensured that Punjab did not lose by a huge margin. Shardul Thakur picked a 4-wicket haul as Delhi restricted Punjab to 142/9 in 20 overs.

In the first innings, Punjab Kings began on the perfect note as their bowlers came down heavily on Delhi Capitals' top order. Liam Livingstone proved right on the money as he starred with the ball. The all-rounder got 3 wickets including David Warner’s who he got on the first ball of Delhi’s innings. Regular loss of wickets hurt Rishabh Pant’s side who could only put together 158 run target. Mitchell Marsh was their best performer with 63 in 48 balls.

Earlier, Punjab won the toss and decided to bowl first against Delhi Capitals.

GET ALL MATCH RELATED UPDATES HERE IN HINDI

Khaleel Ahmed leaks 12 runs in the 15th over.

Axar to Rishi Dhawan, out Bowled!

Dhawan out after scoring 4 in 13 balls, and Raul Chahar comes in next.

Kuldeep Yadav to Livingstone, out Stumped

Livingstone walks back after scoring 3(5). Harpreet Brar comes in next.

Axar to Mayank, out Bowled!

Agarwal walks back without opening his account. Jitesh is the new man in.

Thakur to Rajapaksa, out Caught by Nortje!

Rajapaksa walks back after scoring 4 in 5 balls. Livingstone walks in.

Thakur to Dhawan, out Caught by Pant!

Thakur also removes Shikhar Dhawan after he scored 19 in 16 balls. Agarwal walks in next.

Nortje to Bairstow, out Caught by Axar!

After providing a good start, Bairstow walks back after scoring 28 in 15 balls.

Rajapaksa is the new man in.

Nortje gives away 11 runs in 4th over.

Khaleel Ahmed gives away 13 runs in the 3rd over. While Bairstow smashed a 6 on the first ball of the over, Dhawan finished the over with a 4.

Ahmed leaks 6 runs in the first over.

Bairstow smashes a FOUR off Ahmed on the second ball of the over.

PBKS VS DC LIVE: If Punjab win, they move to top-4!

Arshdeep Singh gets another wicket and removes Shardul Thakur.

Arshdeep Singh to Thakur, out Caught by Harpreet Brar

Thakur walks back after scoring 3 in 4. Kuldeep Yadav new man in.

In the last 5 overs, Delhi could only score 43 runs, lost 2 wickets.

Rabada to Mitchell Marsh, out Caught by Rishi Dhawan

Marsh walks back after scoring an important 63 in 48. Shardul Thakur comes in next.

Marsh smashed 3 fours off Arshdeep Singh in 18th over.

Livingstone to Powell, out Caught by Shikhar Dhawan.

Powell walks back after scoring 2 in 6 balls. Axar Patel comes in next.

Livingstone leaks 6 runs in the 14th over.

Livingstone to Pant, out Stumped

Pant walks back after scoring 7 in 3 balls.

Arshdeep Singh to Lalit Yadav, out Caught by Rajapaksa!

Dhawan gives away 7 runs in the 8th over.

Rabada gives away 6 runs in the 6th over. Yadav scored a FOUR off Rabada.

Arshdeep Singh to Sarfaraz Khan, out Caught by Rahul Chahar. Sarfaraz scored 32 in 16.

Lalit Yadav comes in next. Lucky Lalit survives a huge scare on his first ball!

Bairstow got his catch, but it was a no-ball.

Rishi Dhawan gave away 10 runs in 4th over.

PBKS VS DC LIVE: Warner OUT!

Livingstone to Warner, out Caught by Rahul Chahar.

Warner went for a golden duck. Mitchell Marsh comes in next.

For Punjab- no changes, team goes ahead with their winning combinations 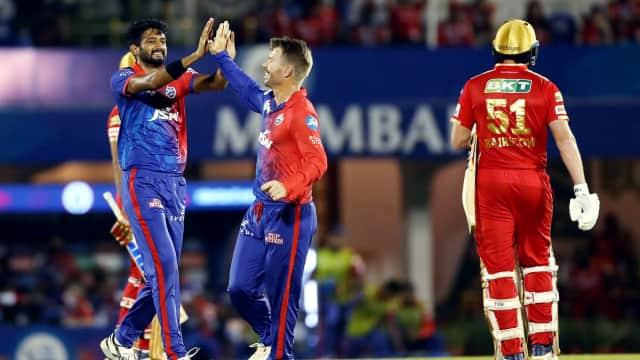 PBKS VS DC LIVE: Delhi are just 1 win away from entering top-4!

PBKS vs DC Head to Head

While in their last meeting, Delhi registered a thumping 9 wicket win over Punjab.

However, overall in the 29 meetings between them, Punjab Kings have dominated with 15 wins while Delhi Capitals have registered 14 victories. 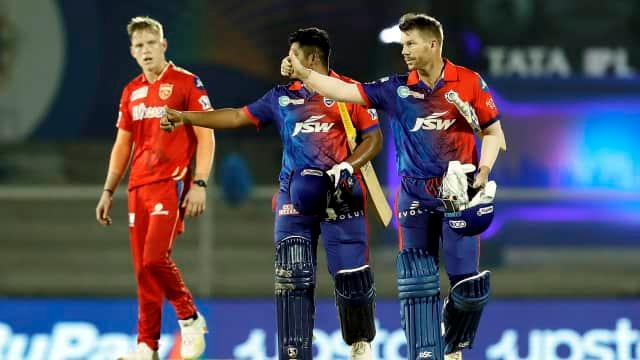 PBKS vs DC preview: A must-win match for Punjab and Delhi

Punjab Kings will be squaring off against Delhi Capitals for the second time in IPL 2022 on Monday at Dr. DY Patil Stadium in Mumbai to keep their playoffs dream alive.

Mayank Agarwal-led Punjab Kings have occasionally been good this season as they have won just 6 out of 12 matches and are placed at the 7th spot on the points table. If Punjab somehow wins their last two games from here, they will definitely climb up the points table and can even qualify for the playoffs.

On the other hand, the situation is not much different for Delhi Capitals as they have also won 6 out of 12 matches and are placed at the 5th spot. Delhi's run rate is better than that of Punjab and a win will strengthen their chances of qualifying for the playoffs. Read More

Get all the match-related updates here.