Nobody gave them a chance but Gujarat Titans, bucking all pre-tournament predictions, surprised everyone by lifting the Indian Premier League title in a dream maiden season after a seven-wicket victory over Rajasthan Royals in the final here on Sunday.

Shubman Gill and David Miller remained unbeaten on 45 and 32, respectively, to complete an emphatic win for their team.

It should have been a comfortable chase but Rajasthan bowled their hearts out to make it an interesting final. As they showed all season, Gujarat remained calm in tough situations to finish the chase in 18.1 overs.

Not many gave Gujarat a chance in their first season especially after a mixed auction where they waited till the end to secure the services of wicketkeepers Wriddhiman Saha and Matthew Wade.

It was not a team studded with star players but Hardik impressed with his leadership and got the best out of his colleagues.

His performance with bat and ball also contributed immensely to the team's triumph besides the ability to bounce back from any situation through the brilliance of Miller and Rahul Tewatia.

After posting an underwhelming total, Rajasthan had to produce a special effort with the ball to get back in the game.

The pace duo of Trent Boult and Prasidh Krishna were brilliant in the powerplay, reducing Gujarat to 31 for two with Wriddhiman Saha (5) and Matthew Wade (8) back in the dugout.

Krishna got one to seam back in from good length to breach Saha's defence and crash into the stumps.

Boult, who also bowled a maiden over in his tidy spell, removed Wade. Gujarat would have been three down in the powerplay if Yuzvendra Chahal held on to a simple catch of Gill off Boult in the first over of the innings.

Hardik and Gill struggled to get the boundaries but never felt extreme pressure as the asking rate remained very much in control.

R Ashwin was introduced in the 12th over and Hardik (34 off 30) decided to go after him, collecting a four and six off successive balls to bring up the 50-run stand with Gill and take Gujarat to 77 for two in 12 overs.

The skipper fell to a brilliant leg break from Chahal but Gill and Miller got the job done in the end. The entire stadium, housing more than a lakh people, erupted when Gill hit the winning six.

Earlier, Hardik (3/17) struck thrice in his four overs while Rashid Khan (1/18) delivered yet again on the big stage to put their team on course for a title in its debut season.

Rajasthan did not have the best of starts after skipper Sanju Samson decided to put runs on the board in a big final.

Obed McCoy bowls the penultimate over and Shubman Gill smashes the first ball for a SIX and wins IPL title for Gujarat.

R Ashwin continues and Shubman hits the first ball to cover for no run. Gill works the next ball towards the square leg for a single.

Miller goes for a glory shot but manages only an inside edge, a couple of runs taken.

Prasidh Krishna [3.0-0-27-1] is back into the attack and Miller defends the first ball.

Miller cuts the second ball towards deep third man for a couple of runs.

Miller top-edges the 4th ball towards fine leg boundary for a FOUR.

Miller edges the 5th ball towards third man boundary for FOUR. A single for Miller to end the over.

Ashwin continues and Gill collects a couple of runs followed by a single.

Miller hammers the 3rd ball towards cow corner stands for a SIX and takes a single off the next ball.

Gill taps the 5th ball towards cover for a single. A single for Miller to end the over.

Obed McCoy [2.0-0-12-0] is back into the attack and concedes eight runs, including a boundary to Miller.

Yuzvendra Chahal is back into the attack and Hardik collects a couple of runs off the first ball.

Hardik edges the second ball to the first slip, GONE.

Chahal concedes 5 runs in the over.

R Ashwin comes into the attack and Hardik, and Shubman takes a single each off the first two balls.

Hardik cuts the third ball towards the third man for FOUR. He hammers the 4th ball toward cow corner for a SIX follows for a single.

Ashwin leaks 15 runs in the over

Obed McCoy [1.0-0-4-0] is back into the attack and concedes eight runs, including a boundary to Hardik.

Prasidh Krishna [2.0-0-17-1] is back into the attack and Gill collects a single off the first ball.

Hardik smashes the third ball over mid-off for FOUR. Gill gets a thick inside edge off the last ball for FOUR off the last delivery.

Yuzvendra Chahal, right-arm leg break, comes into the attack and concedes six runs, including a boundary to Shubman Gill.

Trent Boult continues and Gill collects a single off the first ball.

Hardik Pandya arrives at the crease and fails to score off the remaining three deliveries.

Trent Boult continues and bowls a MAIDEN over.

Prasidh Krishna, right-arm fast medium, comes into the attack and Saha pulls the 2nd ball towards deep mid-wicket for FOUR.

Prasidh cleans up Saha off the 4th delivery.

Mathew Wade arrives at the crease and collects a couple of runs off the 5th ball.

Wriddhima Saha and Shubman Gill at the crease. Saha on strike. Trent Boult opens the attack and concedes only one run off the first 5 deliveries.

Parag flicks the second ball for a couple of runs. Parag cuts the third ball for FOUR towards deep backward point.

McCoy gets runout off the 4th ball.

Sai Kishore continues and gets the wicket of Boult.

Obed McCoy smashes the last ball for a SIX.

Sai Kishore, Left arm orthodox, comes into the attack and gets the wicket of Ashwin.

Hetmyer smashes two boundaries in the over and Hardik takes the revenge as he dismissed the southpaw off the last delivery.

Hardik Pandya continues and Jos Buttler tries to play a cheeky shot but manages only an edge, GONE.

Ashwin joins Hetmyer at the crease.

Hardik concedes only three runs in the over. 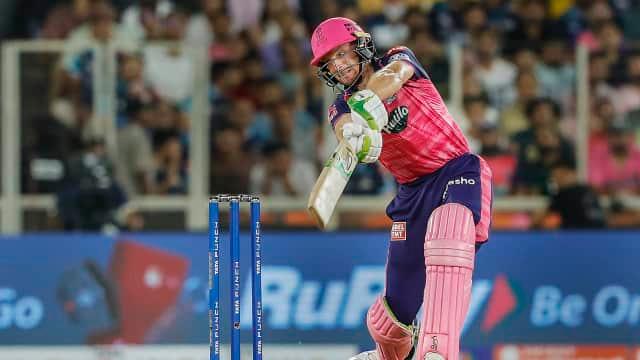 Rashid Khan comes back into the attack and concedes four runs.

He gets the wicket of Padikkal off the 5th delivery.

Mohammed Shami [2.0-0-15-0] is back into the attack and concedes 11 runs, including two back-to-back boundaries to Jos Buttler.

Hardik Pandya comes into the attack and Buttler hits the first ball towards deep extra cover for a single.

Samson goes for a wild swing and manages only a top edge, Sai Kishore completes the catch at a backward point.

Hardik concedes only one run in the over.

GT vs RR FINAL LIVE: Rajasthan 45-1 at the end of the powerplay

Rashid Khan comes into the attack and Samson smashes the first ball through extra cover for FOUR, thanks to a miss-field from R Sai Kishore.

Rashid concedes eight runs in the over.

Rajasthan 45-1 at the end of powerplay

Lockie Ferguson comes into the attack and concedes six runs, including a boundary to Samson.

Yash Dayal continues and Jaiswal collects a single off the first ball. Jos Buttler would have got runout if there has been a direct hit.

Jaiswal collects a couple of runs off the 4th ball.

Jaiswal hoicks the 5th ball towards over fine leg boundary for a SIX. Jaiswal tries to repeat the same shot but fails to do so, GONE.

Shami continues and Buttler collects a single off the first ball.

Jaiswal smashes just over Hardik Pandya at mid-off for FOUR. Jaiswal plays a powerful extra cover drive for a SIX.

Shami concedes 14 runs in the over.

Yash Dayal comes into the attack and Buttler defends the first two balls.

Buttler cuts the 3rd ball through backward point for FOUR and takes a single off the 5th ball.

GT vs RR FINAL LIVE: Rajasthan 2-0 after 1 over

Yashasvi Jaiswal and Jos Buttler at the crease. Jaiswal on strike. Shami opens the attack and concedes only two runs in the over. 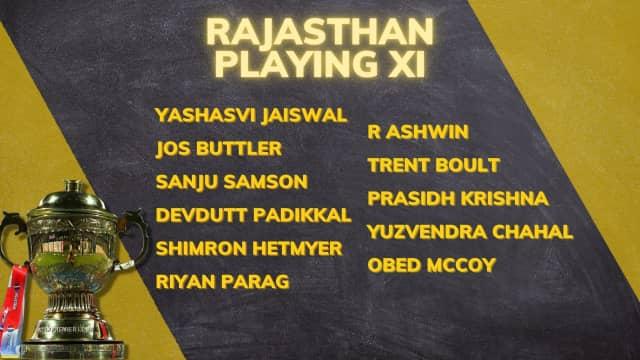 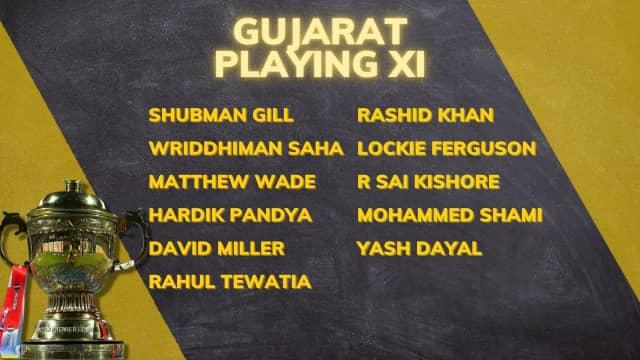 Sanju Samson wins the toss and elects to bat first

Bowlers who can hit the deck hard, bowl that back of a length can cause trouble to the batters, the dimensions are pretty much the same, although one side is slightly shorter. Teams that have batted first have won the final 9 times, win the toss, bat first and put up something around 180-190,

After brilliant performances of Ranveer Singh and AR Rahman, closing ceremony comes to an end.

Ranveer Singh is performing on his various hit songs, from Ainwanyi Ainwayi to gala gudiya

Fans are ready for the closing ceremony extravaganza. 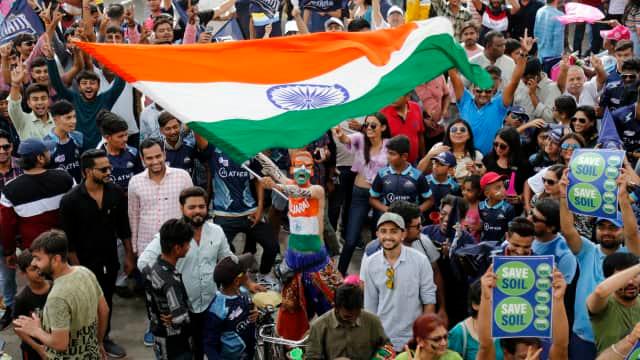 Many dignitaries along with BCCI president Sourav Ganguly and general secretary Jay Shah will be present during the grand closing ceremony.

AR Rahman and Ranveer Singh to perform at Narendra Modi Stadium during the closing ceremony.

A fit-again Hardik took to leadership like fish takes to water and showed the way with his performances and the reason why he will always be an asset for Indian cricket.

Miller, who played his best cricket at least five years back, showed his 2.0 version that stunned one and all. Tewatia showed that those five sixes in Sharjah wasn't a mere flash in the pan.

Rashid Khan knew that he would be read well, so he became all the more parsimonious. Wriddhiman Saha after Rahul Dravid's hard-talk had reached a dead-end in his career but got a new lease of life and at least one more season to look forward to.

GT vs RR FINAL LIVE: Gujarat on a dream run in their inaugural edition

It is not known if Titans skipper Hardik has watched it but for him and head coach Ashish Nehra, this journey of two months has been nothing short of spectacular. They have made a lot of people eat a humble pie because many, including experts, termed them a team of no-hopers post-auction. A team that looked like a rag-tag outfit with only a few good players like David Miller, considered past their sell-by date, or one-match wonders like Rahul Tewatia, it didn't really look good on paper.

Two leaders, who are minefields of talent in their own right, one team that has made a mockery of all betting odds and the other trying to complete a cycle that started 15 summers back, the IPL final between Gujarat Titans and Rajasthan Royals is about this and much more.

When IPL started over two months back, nobody would have believed that two captains walking out for toss in the title clash will be Hardik Pandya and Sanju Samson.

'Remember the Titans', a 2000 Hollywood film headlined by Denzel Washington is considered one of the best sports films on the proverbial underdog story, which always has a capital.

Graeme Smith said that Rajasthan have an advantage over GT since they have won the Qualifier 2 on the same surface. Motera Stadium which hosted RR vs RCB will also be the venue for the IPL final.

Suresh Raina feels the advantage lies with Gujarat Titans who got the direct ticket to the finals after defeating Rajasthan Royals in Qualifier 1. GT will have the slight edge because they have got a good 4-5 days rest, Raina said adding that the tempo they have had in this season will further boost their confidence. 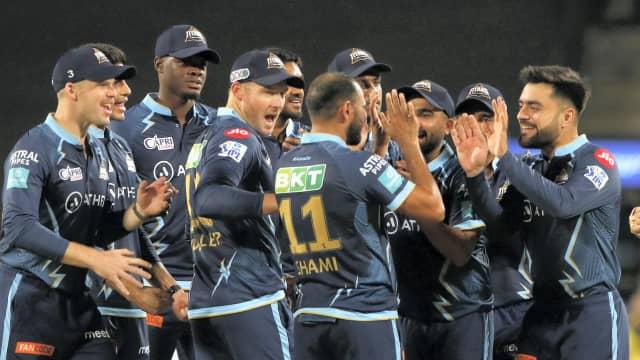 Hardik Pandya-led Gujarat Titans have been enjoying their maiden IPL season as they reached the final in their debut after crushing Rajasthan in Qualifier 1. The team also became the first team to qualify for the playoffs as they finished at the top of the points table with 10 wins in 14 matches.

Hello and welcome to our live coverage of the Gujarat vs Rajasthan IPL final match. As both the teams are gearing up for IPL 2022 final match, stay tuned with us for all the live updates related to the closing ceremony and GT vs RR final match.