Maharashtra Shiv Sena MLA and minister Eknath Shinde on Sunday moved the Supreme Court against the disqualification notice issued by the deputy speaker to him and 15 other rebel legislators, calling the action "illegal and unconstitutional" and seeking a stay on it.

A vacation bench of Justices Surya Kant and J B Pardiwala is likely to hear Shinde's plea on Monday seeking directions to the deputy speaker to not take any action in the disqualification petition against him.

Shinde and a sizable number of MLAs rebelled against the leadership of Chief Minister Uddhav Thackeray on June 21 and are currently in Guwahati in Assam.

Their main demand is that the Sena withdraws from the Maha Vikas Aghadi alliance, which also comprises the Congress and NCP.

Former Mumbai mayor and Shiv Sena leader Kishori Pednekar on Sunday said the wives of several rebel MLAs were calling Rashmi Thackeray, the wife of Maharashtra Chief Minister Uddhav Thackeray, to get their husbands to return to the state.

Pednekar was reacting to reports that Rashmi Thackeray was phoning the wives of rebel MLAs to get them to return.

"Rashmi Thackeray has cordial and family relations with the party's leaders and workers. I am not sure if she is calling the wives to ask their husbands to return, but I know for a fact that wives of many rebel MLAs have spoken to Rashmi vaini (sister) asking that their husbands be brought back. Her relations with everyone is beyond politics," she claimed.

The Ulhasnagar office of the MP was attacked on Saturday by a mob of eight to 10 persons and a video of the incident had gone viral soon after.

Suresh Patil, Niteen Both, Umesh Pawar, Santosh Kanse and Latesh Patil, all 'shakha pramukhs' of the Sena, and Bala Bagure, a functionary of the Yuva Sena, the party's youth wing, have been held under provisions of the IPC, Maharashtra Police Act, an Ulhasnagar police station official said.

Shiv Sena leader Sanjay Raut on Sunday posted a tweet targetting the rebel MLAs of the party, in which he said that however long they may "hide" in Assam's Guwahati, they will ultimately have to come to "chowpatty", a reference to Mumbai.

"How long will you hide in Guwahati, you will have to come to chowpatty," the Sena MP tweeted in Hindi along with a photo of the state Assembly's Deputy Speaker Narhari Zirwal looking into the distance.

My fight is for rescuing Sena from clutches of `python of MVA,' says Eknath Shinde

Rebel Shiv Sena leader Eknath Shinde on late Saturday evening said Shiv Sena workers should understand that he was fighting to save the party from the clutches of the Maha Vikas Aghadi (MVA).

Shinde's appeal came after Sena workers loyal to party president and Maharashtra chief minister Uddhav Thackeray staged protests against the rebel MLAs led by him by defacing their banners, hurling stones in some places and vandalising the office of an MLA in Pune.

Turmoil in Shiv Sena a battle between truth and lies: Aaditya Thackeray

Shiv Sena leader and Maharashtra minister Aaditya Thackeray on Saturday said the present turmoil in the party, triggered by senior leader Eknath Shinde's rebellion, is the battle between "truth and lie".

Speaking to reporters after attending the Shiv Sena national executive," Aaditya said, "We will win and the truth will prevail. This is a battle between truth and lies." Aaditya, son of Sena president and Maharashtra chief minister Uddhav Thackeray, held a meeting with Sena workers from south Mumbai to rally the party cadre. 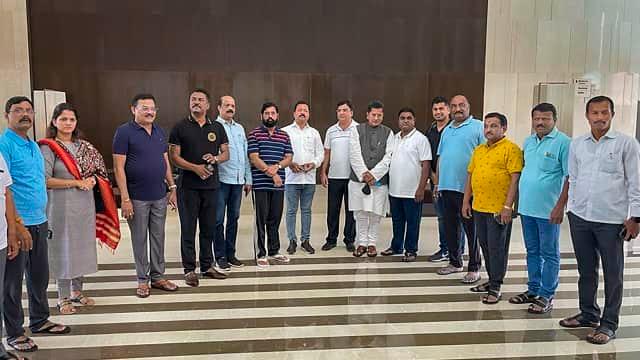 Whose Shiv Sena is it anyway?

At a meeting of its national executive held in Mumbai on Saturday, the Shiv Sena passed several resolutions to stop Eknath Shinde-led rebel camp from taking control of the party.  The party declared that Uddhav Thackeray has the sole right to take decisions about Shiv Sena and its issues.

One of the resolutions passed stated that no one would be allowed to use the name of the party or its founder Balasaheb Thackeray.

Thane collector Rajesh Narvekar has issued prohibitory orders in the district against the backdrop of Shiv Sena strongman from the region Eknath Shinde rebelling against his party, an official said on Saturday.

The order, which will be in force till June 30, prohibits processions, display of posters and placards etc, as well as possession and carrying of lethal weapons, the official added.

Similar orders have also been issued by the Thane police commissioner.

Maharashtra home minister Walse Patil said the chief minister and the home department did not order the removal of security cover of any MLA in the state.

''Allegations being made through Twitter are false and malicious," he said.

Union Minister Ramdas Athawale on Saturday said the MVA government in Maharashtra no longer enjoyed majority in the legislature as over two-third MLAs of the Shiv Sena were with rebel leader Eknath Shinde.

He was speaking to reporters after meeting former chief minister and Leader of Opposition Devendra Fadnavis.

"Shiv Sena rebel Eknath Shinde has support of more than two-third MLAs, thus reducing the MVA government to a minority. Fadnavis told me the BJP has no role to play in this development. The BJP has neither initiated this rebellion nor supported it, he told me. The BJP will wait and watch," the Union minister of state of social justice and empowerment said.

Dissident Shiv Sena leader Eknath Shinde on Saturday alleged that the Maharashtra government has withdrawn the security cover provided at the residences of 16 rebel legislators, including himself, and dubbed the action as "political vendetta".

Shinde, who is currently camping in Guwahati with the rebel legislators, tweeted a letter signed by the 16 MLAs that is addressed to Chief Minister Uddhav Thackeray and Home Minister Dilip Walse Patil.

In the letter, the legislators said CM Thackeray and the leaders of the ruling Maha Vikas Aghadi (MVA) alliance will be responsible if any harm is caused to their family members.

In his tweet, Shinde alleged that the security cover of the 16 rebel Sena legislators was withdrawn on the orders of Thackeray and Walse Patil due to "political vendetta".

Shiv Sena workers on Saturday vandalised an office of rebel Shiv Sena MLA Tanaji Sawant, who is currently in Guwahati as part of the Eknath Shinde camp.

A group of Sena workers barged into the office of Bhairavnath Sugar Works, which belongs to Sawant, and damaged the office located in Katraj area in the morning, party corporator Vishal Dhanawade, who was part of the action, said.

"The ransacking of Sawant's office is just the beginning and the offices of every traitor (rebel MLA) will be destroyed in the coming days," he said.

The Eknath Shinde-led faction of rebel Shiv Sena leaders announced that it was naming itself the ‘Shiv Sena Balasaheb Group’.

The development comes amid the Uddhav Thackeray-led Shiv Sena presses for their disqualification from the assembly. 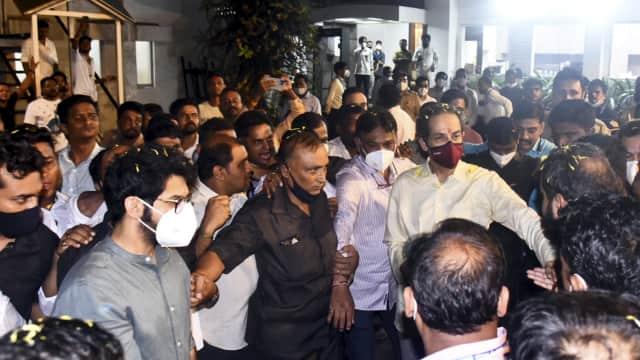 Work should not be hampered by political crisis: Uddhav to bureaucrats

Maharashtra Chief Minister Uddhav Thackeray on Friday told the state administration that important development works related to welfare of people shouldn't be held up due to the ongoing political crisis in the state.

The ruling Maha Vikas Aghadi (MVA) coalition plunged into crisis on Tuesday last when a group of Shiv Sena MLAs, led by cabinet minister Eknath Shinde, rebelled against the party leadership. The NCP and the Congress are also part of the governing bloc.

"Don't hold up important development works related to welfare of people. Get in touch with me directly," Thackeray said during a review meeting attended by divisional commissioners, district collectors, municipal commissioners and secretaries of government departments at the state secretariat.

No national party in contact with us: Eknath Shinde

A day after claiming that a "powerful national party" was supporting his group of MLAs in the ongoing political drama in Maharashtra, Shiv Sena rebel Eknath Shinde on Friday said no national party is in contact with them.

Asked if BJP was backing his group, Shinde told a TV channel, “When I said a big power is backing us, I meant the power of Balasaheb Thackeray and (late Shiv Sena leader) Anand Dighe.”

Responding to a query on when will the political crisis in Maharashtra end, Shinde, a minister in the Uddhav Thackeray-led government in the state, said things will be clear after some time.

Union Minister Piyush Goyal on Friday said that the unholy alliance of Shiv Sena, NCP and Congress in Maharashtra was bound to collapse. He stated that he never saw such a bankruptcy of ideology as seen in the state.

The Uddhav Thackeray-led Shiv Sena suffered yet another setback as one more party MLA has joined the camp of rebel legislators headed by minister Eknath Shinde in Assam. A video of MLA Dilip Lande entering the luxury hotel in Guwahati, where the party rebels have been camping for the past few days, was shared by Shinde's office on Friday.

The move of Lande, who represents Chandivali Assembly constituency in Mumbai, takes the number of Sena MLAs in the rebel camp to 38. However, Shinde has claimed the support of 40 out of the total 55 Shiv Sena MLAs and 12 independents

Police detain Sanjay Bhosale, deputy district chief of Shiv Sena from Maharashtra's Satara, who was present near Radisson Blu hotel to urge party MLAs lodged at the hotel to return to Maharashtra 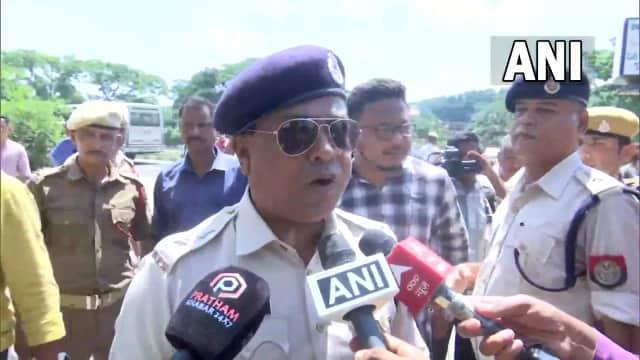 Sanjay Raut: Sena is like waves, people come and go

Process underway to disqualify 12 MLAs (of Eknath Shinde faction), their numbers are only on the papers. Shiv Sena is a big ocean such waves come and go: Shiv Sena leader Sanjay Raut 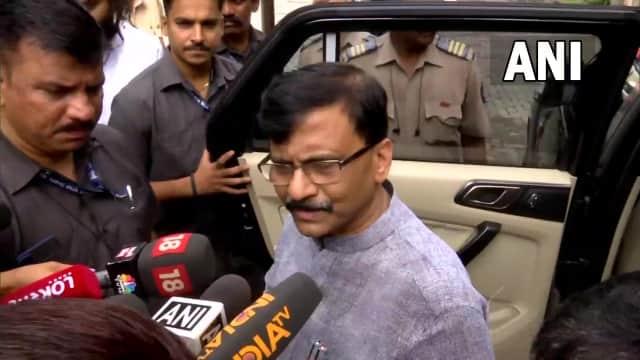 Shinde reaffirms his leadership with letter 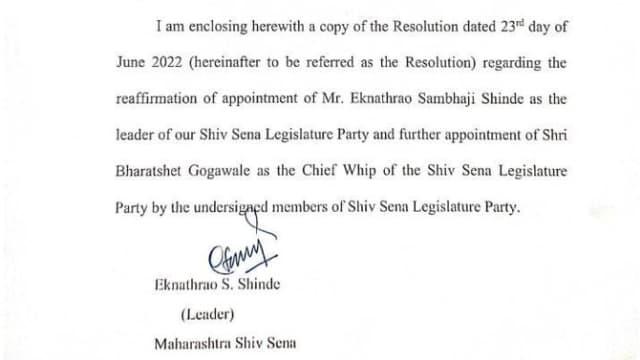 Reportedly three more Shiv Sena MLAs are set to join Eknath Shinde's rebel camp. With this, the 'rebel Sena' number has risen to 49 with 40 Shiv Sena MLAs and 9 independent MLAs. 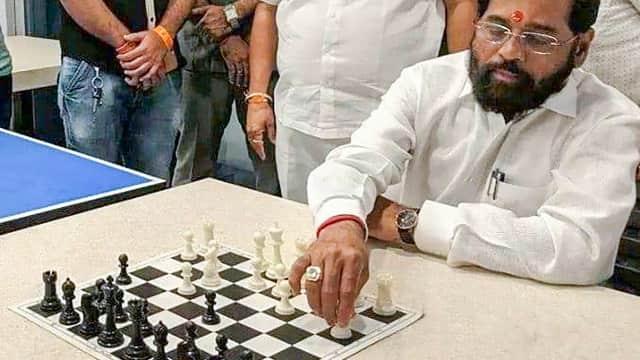 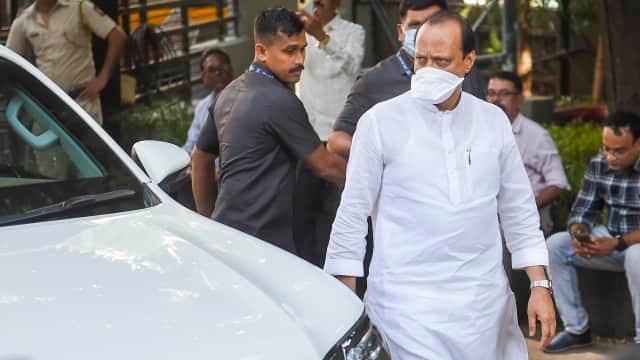 Rebel Shiv Sena MLA Sanjay Shirsat has written a letter to Maharashtra Chief Minister Uddhav Thackeray, claiming that state minister Eknath Shinde took the step of going against the party leadership as Sena MLAs, who faced "humilitation" for the last two-and-a-half years, persuaded him to do so. While the Shiv Sena legislators had no access to the chief minister, the Congress and NCP, which are the "real opponents" of the Sena, were getting all the attention, he claimed in the letter, dated June 22. Shirsat, the MLA from Aurangabad (West) Assembly constituency, in the letter claimed that despite the Shiv Sena being in power and having its own chief minister, the coterie around Thackeray never allowed them access to 'Varsha', the CM's official residence.

Sharad Pawar told us that we should do everything that needs to be done to ensure that the govt remains. We will stand with Uddhav Thackeray, with this govt: Jayant Patil, NCP

The 3 MLAs reached the Guwahati hotel were the rebel faction is staying on Thursday morning.

How the late-night drama unfolded in Maharashtra

SC seeks response from Maha Deputy Speaker, others; next hearing on July 11

Maha political crisis: CM hands over portfolios of 9 rebel ministers to other ministers

BJP has been unmasked: Shiv Sena as Centre announces Y+ security to rebels