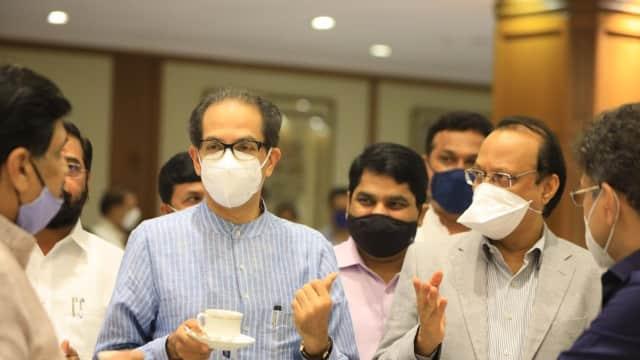 After waiting in the wings in the over week-long political drama sparked off by Shiv Sena minister Eknath Shinde’s rebellion, BJP leader Devendra Fadnavis on Tuesday night met Maharashtra Governor Bhagat Singh Koshyari, and requested him to ask the Uddhav Thackeray government to prove its majority in the Assembly.

Fadnavis claimed that the Shiv Sena-NCP-Congress coalition government seemed to be in minority as 39 Sena MLAs who belong to the Shinde faction have said they do not support the government.

"Therefore, we handed over a letter to the Governor, requesting him to ask the government to prove its majority through a floor test in the House," he told reporters.

Taking a dig at the Maharashtra governor, Raut said the Raj Bhavan has acted at a "jet speed even faster than Rafale" after BJP leaders met him, urging him to seek a trust vote. He reminded the governor that the file pertaining to the nomination of 12 MLCs to the Upper House of the state legislature from his quota has been pending with him for a long time. "This (floor test order) is an unlawful activity as pleas of disqualification of 16 MLAs are pending before the Supreme Court. If such unlawful activities take place, and if the governor and the BJP trample upon the Constitution, then the SC has to interfere," Raut told reporters.

Shiv Sena leader Sanjay Raut on Wednesday termed the Maharashtra Governor's order for a floor test of the Uddhav Thackeray-led government as "unlawful", saying that the Supreme Court is yet to decide on the disqualification of 16 rebel MLAs.

He said the Maha Vikas Aghadi (MVA), the ruling coalition of Sena, NCP and Congress, will approach the Supreme Court and seek justice on this issue.

The ED has issued fresh summons to Shiv Sena MP Sanjay Raut asking him to appear on July 1 for questioning in a money laundering case linked to the re-development of a Mumbai 'chawl' and other related financial transactions involving his wife and friends, officials said.

The Rajya Sabha MP was issued the first summons for Tuesday but he sought more time citing official commitments and a meeting he was supposed to attend at Alibaug.

His lawyers had met Enforcement Directorate officials in Mumbai on Tuesday and sought 14 days' time for his appearance but the agency only gave him a relief till this month end.

Eknath Shinde: MLAs in Assam out of their own accord

50 MLAs with me in Guwahati, they have come of their own accord and for Hindutva: Eknath Shinde.

Will return to Mumbai soon, says Shiv Sena rebel Eknath Shinde; asks Sena to disclose names of his group MLAs who are reportedly in contact with it.

Amid the political turmoil in Maharashtra following a rebellion by MLAs of the ruling Shiv Sena, senior BJP leader Devendra Fadnavis on Tuesday left for Delhi along with a legal counsel, a party functionary said.

The Shiv Sena-led Maha Vikas Aghadi (MVA) government in Maharashtra is facing a crisis as many of its MLAs, led by Eknath Shinde, have rebelled and are currently camping in Guwahati.

"Fadnavis has left for New Delhi with a legal counsel. He will be meeting some senior BJP leaders there," the party functionary said.

The ED had summoned Rajya Sabha member Raut on Tuesday for questioning in the money laundering probe linked to the re-development of a Mumbai 'chawl' and other related financial transactions involving his wife and friends.

BJP doesn't need to prove the majority as of now. We are waiting for MVA to declare that they don't have the numbers: Maharashtra BJP leader Sudhir Mungantiwar

Explained: what is the land scam case in which ED has summoned Sanjay Raut?

Maharashtra governor Bhagat Singh Koshyari has sought details of all the meetings held at Mantralaya and the decisions taken during those meetings from June 22 to June 24. This comes after allegations that the state government took many decisions in a hurry after the rebellion by Sena MLAs. The BJP has alleged that various government departments - mostly controlled by the NCP and the Congress - issued orders releasing funds to the tune of hundreds of crores after it became apparent that the government was on shaky grounds following the revolt.

Sanjay Raut on SC halt on disqualification till July 11

It's an order for them to rest there (in Guwahati) till July 11. There is no work for them in Maharashtra: Shiv Sena MP Sanjay Raut on SC order of allowing Eknath Shinde & other rebel MLAs to file a reply to the disqualification notice issued to them by Dy Speaker by July 11

Shiv Sena leader Aaditya Thackeray: 15-16 rebels are in touch with us

There are two groups of people in Guwahati - there's a group of 15-16 people who are in touch with us, some of them recently. The other group is the one that has run away, they have no courage & morality Maharashtra Minister & Shiv Sena leader Aaditya Thackeray

Shiv Sena MP Sanjay Raut on Monday termed the Enforcement Directorate's summons issued to him as a "conspiracy" to stop him from fighting against their political opponents, and said he will not be able to appear before the agency on Tuesday as he has to attend a meeting in Alibaug.

The ED has summoned Rajya Sabha member Raut on Tuesday for questioning in a money laundering probe linked to the re-development of a Mumbai 'chawl' and other related financial transactions involving his wife and friends, officials said.

SC refuses to pass an interim order on floor

If anything illegal happens, you can always move this court, says SC while refusing to pass interim order on floor test - PTI

Stating that it would now hear the matter on July 11, the Supreme Court on Monday issued notices to Maharashtra deputy speaker Narhari Zirwal, Sena, chief whip Sunil Prabhu and legislature party leader Anil Chaudhary.The apex court directions came on the petitions by Eknath Shinde and 15 other dissident MLAs challenging the disqualification notice to the rebel camp.

Rebel MLAs can't be disqualified till next hearing

BJP has been unmasked: Shiv Sena as Centre announces Y+ security to rebels

Shinde & other MLAs didn't approach HC was that a minority of the legislative party is subverting the state machinery, attacking our houses. They're saying that our dead bodies will return from Assam. Atmosphere is not conducive for us to exercise our rights in Mumbai: Shinde's lawyer.

Rebel MLA and Minister Rajendra Patil Yedraokar supporters and Shiv Sena supporters confronted each other at Jaisingpur in Kolhapur district. Police detained workers after the situation got tense.

Thackeray hands over portfolios of 9 rebel ministers to other ministers

Maharashtra Chief Minister Uddhav Thackeray has handed over portfolios of nine rebel ministers, who are currently camping in Guwahati, to other ministers.

The portfolios of the rebel ministers were being handed over to other ministers for ease of administration, an official statement said.

The Enforcement Director has summoned Shiv Sena MP Sanjay Raut on Tuesday for questioning in a money laundering probe linked to the re-development of a Mumbai 'chawl', officials said. The Rajya Sabha MP has been asked to depose before the federal agency at its office in south Mumbai on June 28 and record his statement under the Prevention of Money Laundering Act (PMLA), they said.

Shiv Sena MP Sanjay Raut on Monday said his party is ready for a "street fight and a legal battle", ahead of the crucial hearing in the Supreme Court against the disqualification notice issued by the Maharashtra Assembly's deputy speaker to rebel party MLAs.

On his remarks made on Sunday that 40 bodies will come from Assam and will be sent directly to the morgue for postmortem, in a reference to the rebel MLAs, Raut said he was speaking about the "dead conscience" of the legislators and that they are "living corpses" now.

"I have not done anything to hurt anyone's feelings. I have only stated the fact that your (rebel MLAs) conscience is dead and you are a living corpse," the Shiv Sena's chief spokesperson told reporters.

A Public Interest Litigation was filed in the Bombay High Court on Monday against Eknath Shinde, who is leading the group of rebel Shiv Sena MLAs from Maharashtra, for causing a "political turmoil" in the state and instigating an internal disorder in the state government.

The PIL sought appropriate action against the rebel leaders for the "omission of duties and moral wrongs committed, leading to disrespect towards the public rights and good governance".

The litigation, filed by seven citizens of Maharashtra, also sought a direction to the Shiv Sena-led Maha Vikas Aghadi (MVA) government in the state to submit a detailed plan of assurance, detailing the process of governance in the absence of several of its ministers.

"It (rebellion) is an internal issue of the Sena. However, there is surely some powerful force supporting Shinde. He will not take such a bold step without powerful backing. I have not seen such instability in the state in my 40-year career," Khadse said.

With the Centre providing Y-plus security to Maharashtra's rebel Shiv Sena MLAs, the party on Monday claimed it was now evident that the BJP was "pulling the strings" amid the current political turmoil in the state.

An editorial in the Sena mouthpiece 'Saamana' likened the rebel Sena MLAs led by Eknath Shinde to "big bulls", and alleged that they have been "sold" for Rs 50 crore.